E-Mail
I want to receive news on my email
Poll
What do you think of Iran on trip website?
Historical Mosques of Iran

Imam Mosque (Masjid-e Jam 'e Abbasi), also called Masjid-e Shah (Royal Mosque) before the victory of Islamic Revolution, is one of the finest and the most stunning buildings in the world standing in south side of Naghsh-i Jahan Square(Isfahan).The Mosque, begun in 1612 during the reign of Shah Abbas I represents the culmination of a thousand years of mosque building and a magnificent example of architecture, stone carving, and tile work in Iran, with a majesty and splendor that places it among the world's greatest buildings. The Mosque is also an excellent example of Islamic architecture of Iran, and regarded as the masterpiece of Persian Architecture. It is registered along with the Naghsh-i Jahan Square as a UNESCO World Heritage Site. Its construction began in 1611, and its splendor is mainly due to the beauty of its seven-color mosaic tiles and calligraphic inscriptions.Read more

Sheikh Lotfollah Mosque is situated on the eastern side of this square and the northern side opens into the Isfahan Grand Bazaar.Sheikh Lotfollah Mosque was built during Shah Abbas time, and dedicated to his father-in-law, Sheikh Lotfollah, a prominent religious scholar and teacher.This beautifully proportioned and decorated mosque, with some of the best mosaics from that era, took nearly 20 years to complete. The pale tiles of the dome change color, from cream through to pink, depending on the light conditions and the mosque is unusual because it has no minaret or courtyard.Read morae

A mosque was built in the 10th century and was named Masjed-e Jorjir was ruined. On the site of Jorjir mosque a new mosque was planned and constructed. This mosque was called “Hakim Mosque“ and was built in 1656.This mosque was constructed by Hakim Davoud a physician of Shah Abbas the second court. Hakim Davoud was forced to move to India. He spent last years of his life at the court of Jahan Shah in India.One of the oldest Isfahan Mosques it comes under officially recognised monuments of Iran. For a virtual tour and pictures of the city click on the link to the Hakim Mosque on the Isfahan Site. It has been included in the books published by Iranian Ministry of  Antiquities on Monuments Of Iran,Read more 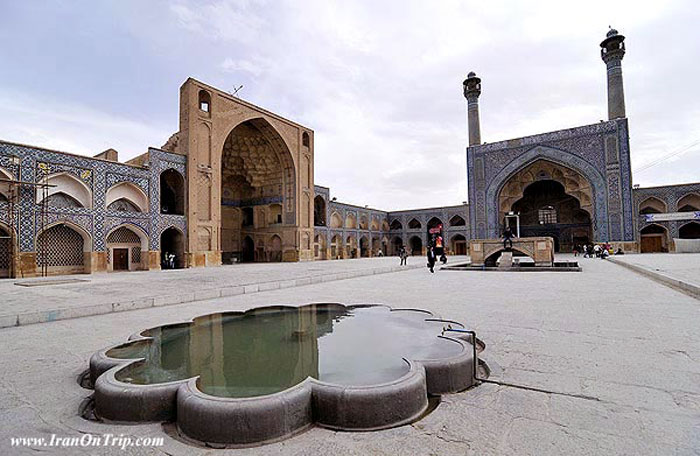 Masjed-e Jame of Isfahan: This Friday mosque represents the evolution of mosque building since early post-Islam era in Iran beginning in 9th century. Over time, different corners of the mosque have been constructed in different styles of their own times. This is the first Islamic building that has inherited Sasanian Read more Location: Kashan, Isfahan province
Agha Bozorg is the name of one of the finest mosques in Kashan, Isfahan province.The historical mosque, built in the late 18th century, is famous for its precise, symmetric architecture and attractive appearance.It is a good example of Persian architecture with a central courtyard and a pool in the middle.Agha Bozorg was constructed by the master architect Ustad Haj Sa’ban-Ali and was assisted by his pupil named Ustad Ali Maryam, who later on became one of the most famous architects of Persia.Read more

The Nasir al-Mulk Mosque (Persian: مسجد نصیر الملك‎ - Masjed-e Naseer ol Molk) or Pink Mosque is a traditional mosque in Shiraz,Iran, located in Goade-e-Araban place (near the famous Shah Cheragh mosque). The mosque was built during the Qājār era, and is still in use under protection by Nasir al Mulk's Endowment Foundation. It was built by the order of Mirza Hasan Ali Nasir al Molk, one of the lords of the Qajar Dynasty, in 1876 and was finished in 1888. The designers were Muhammad Hasan-e-Memar and Muhammad Reza Kashi Paz-e-Shirazi.The mosque extensively uses colored glass in its facade, and it displays other traditional elements such as panj kaseh-i (five concaves) in its design. It is also named in popular culture as Pink Mosque due to the usage of beautiful pink color tiles for its interior design.Read more 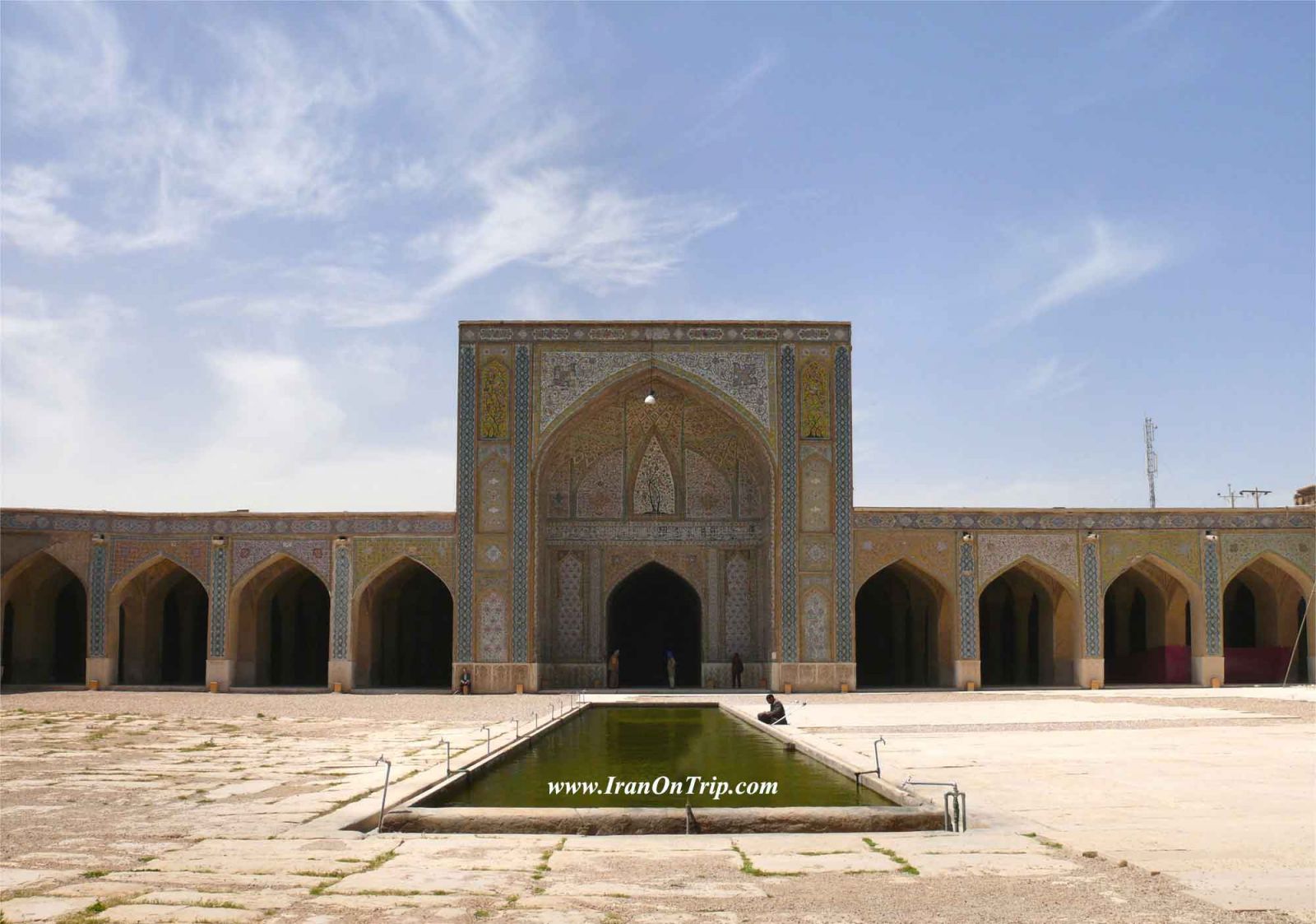 Introduction: The Vakil Mosque (Persian: مسجد وکیل ‎ - Masjed-e Vakil) is a mosque in Shiraz, southern Iran, situated to the west of the Vakil Bazaar next to its entrance. This mosque was built between 1751 and 1773, during the Zand period; however, it was restored in the 19th century during the Qajar period. Vakil means regent, which was the title used by Karim Khan, the founder of Zand Dynasty. Shiraz was the seat of Karim Khan’s government and he endowed many buildings, including this mosque.Read more The ancient Jame’ Atiq Mosque of Shiraz is one of the oldest mosques in Iran and a relic of the days of the Saffarid Amr bin Leys’s reign. It is a structure referred to many times in the writings of travelers such as the Bin Battuta and Madame Dieulafoy.The Saffarids were a people of Iranian stock who were originally from the province of Sistan.During the course of their sovereignty, that is, from 867 to 903 AD, they did not neglect the construction of public buildings, of which the Jame’ Mosque, is a prime example despite the many conflicts they had with the Baghdad Caliphs and local rivals. The construction of the mosque started in 894 as an act of thanksgiving following the victory of Amr Leys forces over the armies of the Abbassid Caliph al-Movaffaq.Read more

The Friday mosque of Kerman is located in the prominent city of Kerman, which was established almost a thousand kilometers southeast of Tehran on an important crossroads of mercantile activities connecting north to south and west to east. This location led to the emergence of its famous, vibrant bazaar. The bazaar begins at the Friday mosque's rear portal and extends along the east-west axis, ending at the Arg Square. The Friday mosque of Kerman was built in 1350 by Amir Mobarezeddin Mohammad-e-Mozaffari-e-Meybodi- Yazdi under the Muzaffarids, who pushed away the Il Khanids after Abu Sa'id's death in 1335 and established their own dynasty, ruling central Iran from 1314 to 1393. The Friday mosque is the earliest surviving example of Muzaffarid architecture.Read more