E-Mail
I want to receive news on my email
Poll
What do you think of Iran on trip website?
Imam Mosque(Masjed-e Shah)or(Masjid-e Jam 'e Abbasi) 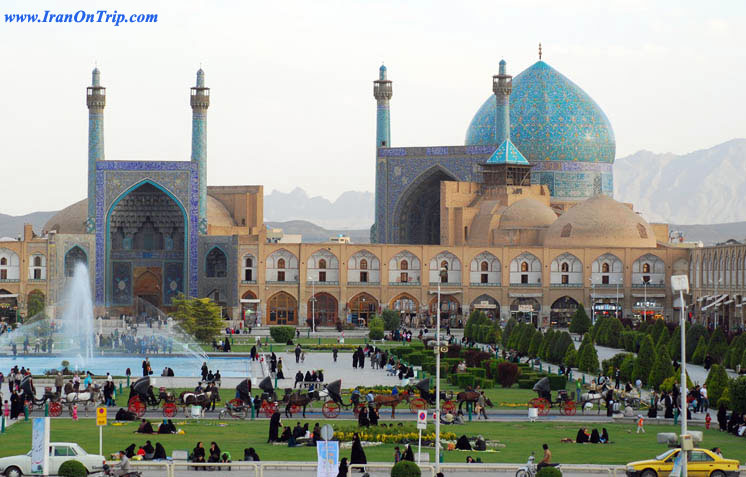 Imam Mosque (Masjid-e Jam 'e Abbasi), also called Masjid-e Shah (Royal Mosque) before the victory of Islamic Revolution, is one of the finest and the most stunning buildings in the world standing in south side of Naghsh-i Jahan Square(Isfahan). 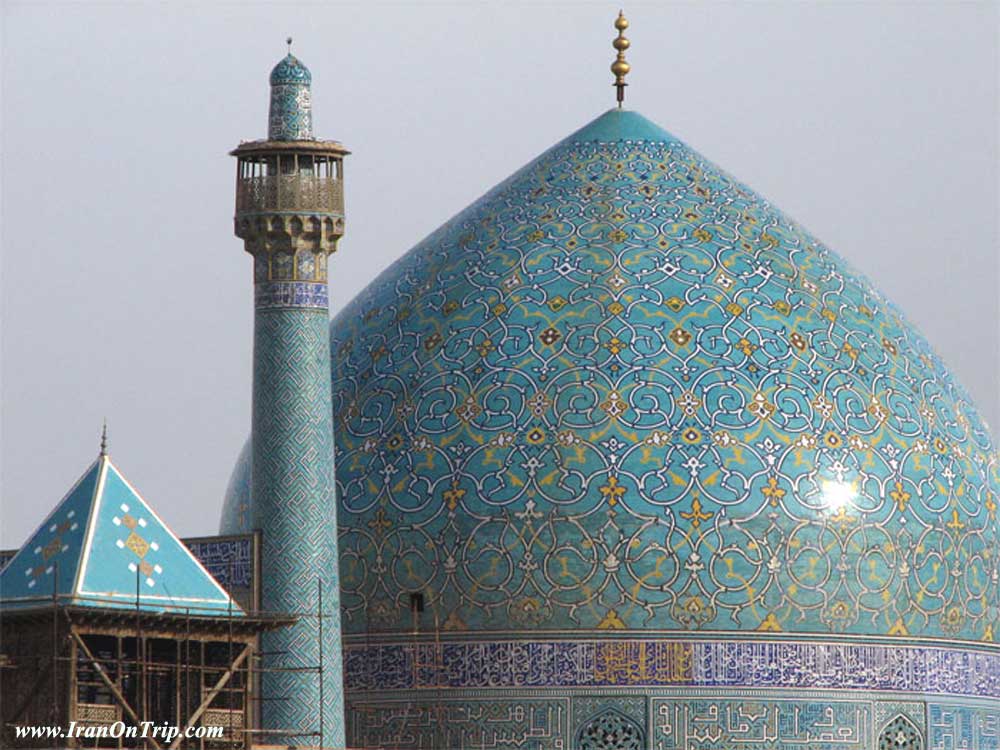 The Mosque, begun in 1612 during the reign of Shah Abbas I represents the culmination of a thousand years of mosque building and a magnificent example of architecture, stone carving, and tile work in Iran, with a majesty and splendor that places it among the world's greatest buildings. The Mosque is also an excellent example of Islamic architecture of Iran, and regarded as the masterpiece of Persian Architecture. It is registered along with the Naghsh-i Jahan Square as a UNESCO World Heritage Site. Its construction began in 1611, and its splendor is mainly due to the beauty of its seven-color mosaic tiles and calligraphic inscriptions.
The port of the mosque measures 27 m (89 ft) high, crowned with two minarets 42 m (138 ft) tall. The Mosque is surrounded with four iwans and arcades. All the walls are ornamented with seven-color mosaic tile. The most magnificent iwan of the mosque is the one facing the Qibla measuring 33 m (108 ft) high. Behind this iwan is a space which is roofed with the largest dome in the city at 52 m (171 ft) height. The dome is double layered. 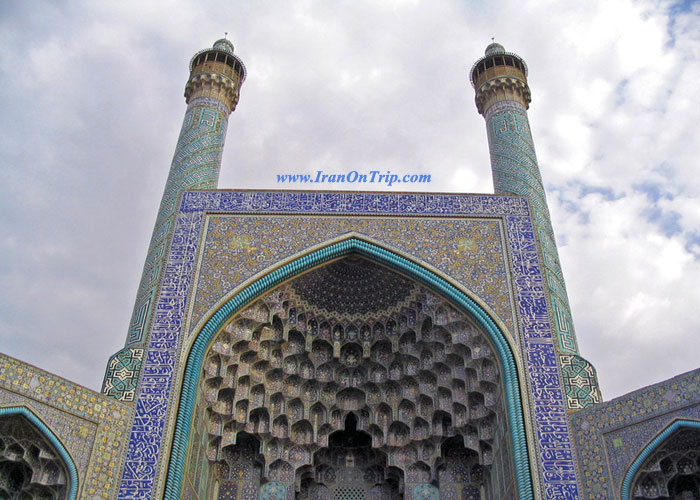 The acoustic properties and reflections at the central point under the dome is an amusing interest for many visitors. There are two seminaries at the southwest and southeast sections of the mosque.
The portal, almost a building in itself and understood as an aspect of the Maidan rather than of the mosque, forms a welcoming embrace, inviting and guiding the throngs outside into the refuge, security and the renewal the mosque provides. In fact, it is the most thrilling example of human artifice that could be imagined. Its height amounts to 30 m, the flanking minarets are 42 m tall- with the sanctuary minarets higher still, 48 m. The two panels which flank the actual entrance within the recess carry the design of a prayer rug, a reminder of the mosque's essential purpose. 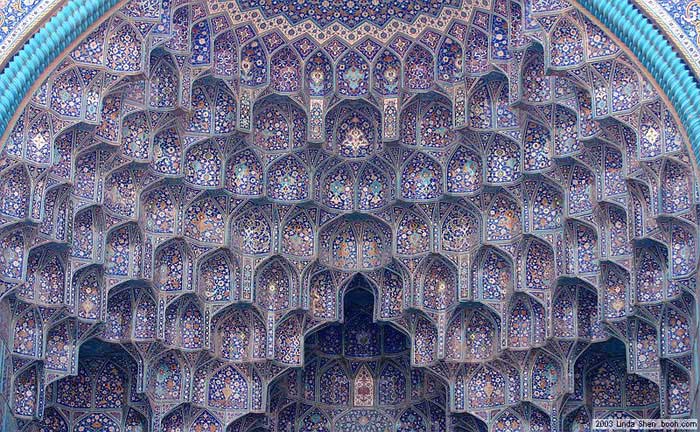 A mosaic tile inscription by Ali Reza Abbasi can be seen on the main portal of the mosque, which is dated 1616 AD (completion date of the portal). Below this, there is still another inscription that gives the name of the builder as Ali Akbar Esfahani, and that of the construction supervisor as Muhib Ali Beigallah. Several other inscriptions can also be seen on the portal and in the narthex of the mosque.
However, Shah Abbas needed a showplace, just as he needed the Sheikh Lutfollah Mosque for private meditation, and he built this whole gigantic structure, with two seminaries (ma4rasehs) in the few years from 1612 until his death in 1629, the year of the great copula's completion.
Through the outer portal one enters a noble vestibule, which is a usual feature. Octagonal, it has no particular direction; it can therefore serve as a pivot on which the axis of the building is turned, the gateway to another world of splendor and concentrated power.
Of the classical-Jour ivans the west ivan has a wide porch surmounted by a minaret. The south ivan (also the largest) opens to reveal a great prayer hall surmounted by a double cupola 38 m high on the inside and 52 m on the outside (leaving a 12-meter empty space which serves as an extraordinary "echo chamber", since a speaker in the mehrab can be distinctly heard in all other parts of the mosque), its surface decoration being of the most sumptuous richness, a floral design in gold, yellow and white spiraling on a deep blue ground. In the center of the great prayer hall look out for a few black paying stones underneath the dome, which when stamped upon create seven clear echoes. Try it for yourself; everyone else does. 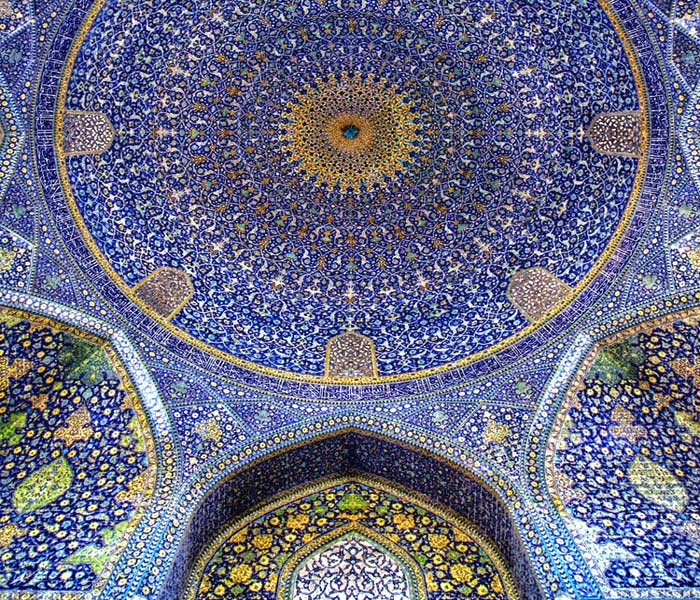 The fact that sound is equally carried to all parts of the dome chamber and cloisters on each side as well as to the courtyard and the lateral porches indicates that four centuries ago, Iranian architects were able to produce buildings provided with acoustics not inferior to those of any modern building.
Great jasper and marble bowls like fonts each made of a solid stone block, can be seen near the portal gate, under the western and eastern domes, and in the cloisters on both sides of the great southern prayer hall. These are unique in terms of delicacy and care with which they were made. They used to be filled, on various with water 91 sherbet to quench the thirst of worshipping throngs in summer.
To the east and west of the mosque there are two madrasehs (theological colleges). Two long seminaries at the back are suitably studious in their architectural tranquillity. The dome, elegant and sensitive in contour, slightly bulbous, set on a high drum, is simple, of remarkably clean and expressive outline uncluttered by any supplementary constructions.
In the school building to the southwest of the courtyard there is a piece of stone which acts as a sundial attributed to Sheikh Bahai, the famous scientist and mathematician of the period of Shah Abbas. It indicates noon in Esfahan throughout the year. 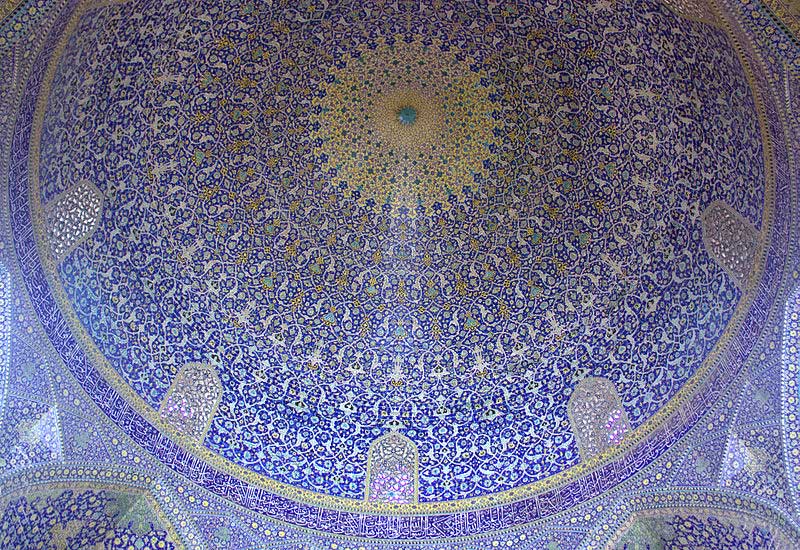 The Seljuqs and the Safavids found the Shah Mosque as a channel through which they could express themselves with their numerous architectural techniques. The four- iwan format, finalized by the Seljuq dynasty, firmly established the courtyard facade of such mosques as more important than their exterior ones. During the Seljuq rule, as Islamic mysticism was on the rise in the region, the four-iwan arrangement came to be interpreted as seeking true meaning within the appearance. Their presence can serve the sole purpose of being the passageway between the material world and that of the spiritual. It must also be noted that glazed brickwork and tiling had little appeal to the Seljuqs as they primarily favored the distinct tranquil color of turquoise blue. 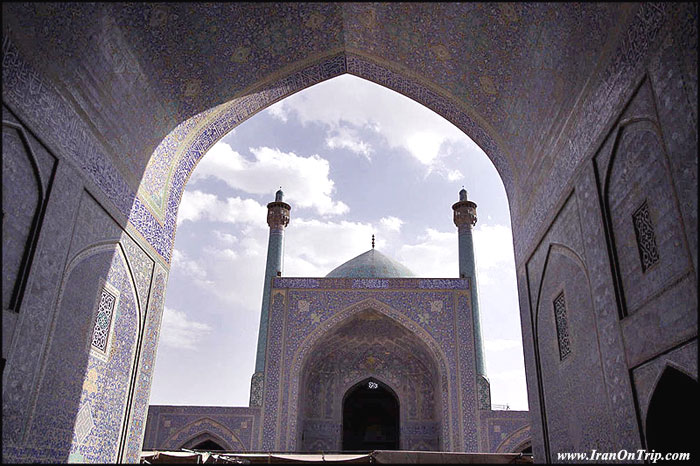 Facing northwards, the mosque’s portal to the Maidan is usually under shadow but since it has been coated with radiant tile mosaics it glitters with a predominantly blue light of extraordinary intensity. The ornamentation of the structures is utterly traditional, as it recaptures the classic Iranian motifs of symbolic appeal for fruitfulness and effectiveness. Within the symmetrical arcades and the balanced iwans, one is drowned by the endless waves of intricate arabesque in golden yellow and dark blue which bless the spectator with a space of internal serenity.
Covered with premeditated calligraphic fresco, the front doors are used as an apparatus to remind the spectator of the glory of God and of Shah Abbas I himself. Entering from the northern iwan, the compelling physical presence of the identical side iwans direct our attention to the soaring qibla iwan situated straight ahead. As a result such architecture stresses the degree of fidelity in the structure which makes it explicitly pervasive. 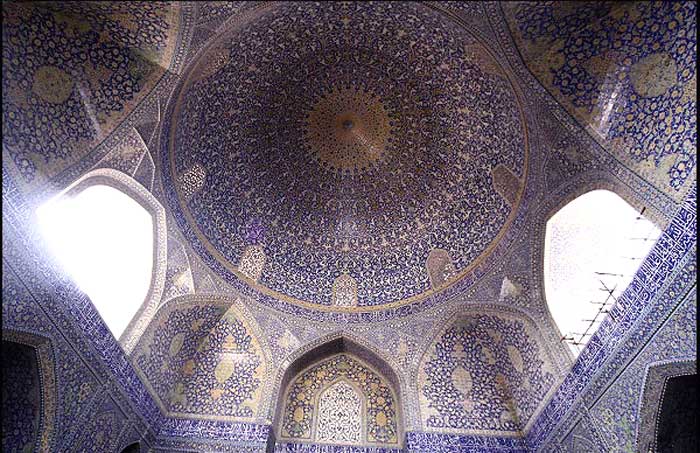 According to A U Pope, both the ground plan and the structure of the building reflect the doctrinal simplicity of Islam. Circulation and communication are everywhere facilitated, nowhere impeded. The common floor level is at no place broken by steps, railings or screens. The walls merge into their garden-Iike floriation or open onto real and natural gardens. Because of the concentration of the bearing load on octagonal stone columns, wide vistas open up and voids are at maximum. The ornamentation is wholly traditional, repeating the Iranian motif of appeal for fertility and abundance. Almost the entire surface of the building is covered with enamel tile. A vast display of floral wealth, abstract and imaginative, emphasizes the Persian poetic passion for flowers, as well as the appeal for a continuance of an abundant life. The best time to photograph is about II am when the sun is overhead.
The mosque is one of the treasures featured on Around the World in 80 Treasures presented by the architecture historian Dan Cruickshank