E-Mail
I want to receive news on my email
Poll
What do you think of Iran on trip website?
Iranian Art 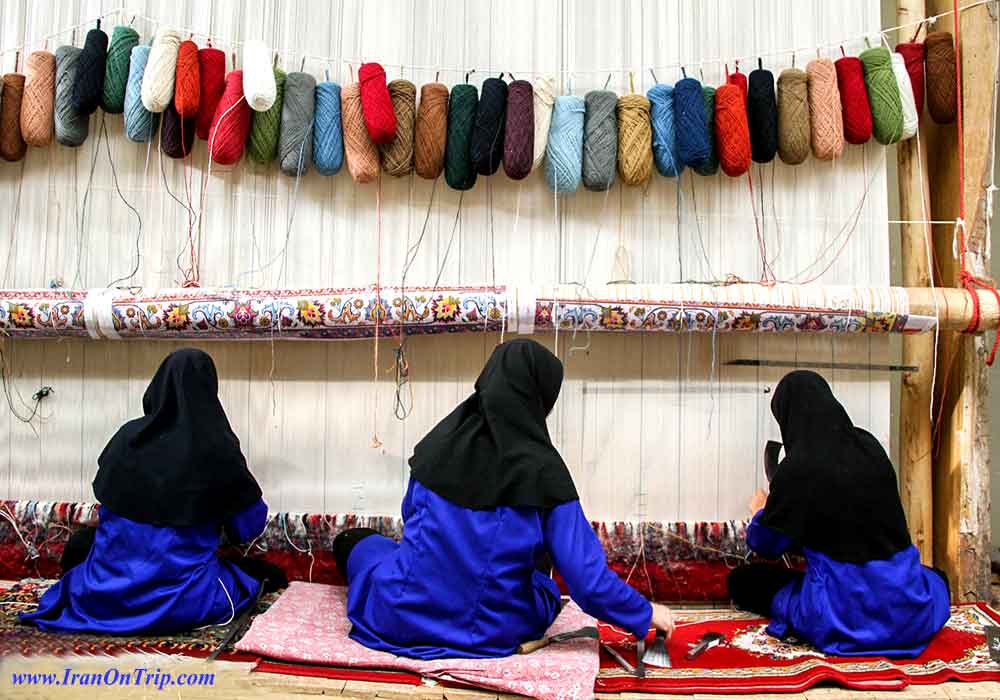 Iranian art, as one of the richest world artistic heritage, dates back to thousands years ago portraying natural and historical events from among which the paintings on cave walls could be mentioned. Moreover, the bas-reliefs in Persepolis as well as the matchless tile-work from the Islamic era add to the richness of Iranian art. Art in Iran covers a vast scope of fields an epitome of which is the Iranian carpet enjoying world fame. Below comes an introduction to the unique ones:Persian art and architecture reflects a 5,000-year-old cultural tradition shaped by the diverse cultures that have flourished on the vast Iranian plateau. Throughout its development, Persian artistic achievement has normally been imperial in nature, with impressive majestic monuments or associated with royal patronage in book illustration. Countless painters, weavers, potters, calligraphers, metalworkers, stone masons etc. have produced some of the most beautiful works ever created, and contributed to the Persian artistic heritage that is known throughout the world. Decoration and painting on metals are from among the handicrafts Iranians have excelled at. The evidence refers to the fact that enamel has its roots in Iran in distant past and then opened its way to other countries. Enamel is the art of painting on and decoration of the surface of a metal through melting shining metal colors. Nowadays, the metal which is used for enamel is copper but in the past, gold and silver were used as well. In today’s Iran, Isfahan is the center for enamel works and distinguished masters are actively involved in it.Read more Oriental historian Basil Gray believes "Iran has offered a particularly unique [sic] art to the world which is excellent in its kind". Caves in Iran's Lorestan province exhibit painted imagery of animals and hunting scenes. Some such as those in Fars Province and Sialk are at least 5,000 years old.Painting in Iran is thought to have reached a climax during the Tamerlane era when outstanding masters such as Kamaleddin Behzad gave birth to a new style of painting. Paintings of the Qajar period, are a combination of European influences and Safavid miniature schools of painting such as those introduced by Reza Abbasi. Masters such as Kamal-ol-molk, further pushed forward the European influence in Iran. It was during the Qajar era when "Coffee House painting" emerged. Subjects of this style were often religious in nature depicting scenes from Shia epics and the like.The themes of Persian miniature are mostly related to the Persian mythology and poetry. Western artists discovered the Persian miniature in the beginning of the 20th century. Persian miniatures uses pure geometry and vivid palette. The allure of Persian miniature painting lies in its absorbing complexities and in the surprising way it speaks to large questions about the nature of art and the perception of its masterpieces. The most important function of miniature was illustration. It gave a visual image to the literary plot, making it more enjoyable, and easier to understand. Miniature developed into a marriage of artistic and poetic languages and obtained a deep and sincere accordance with poetry.Read more 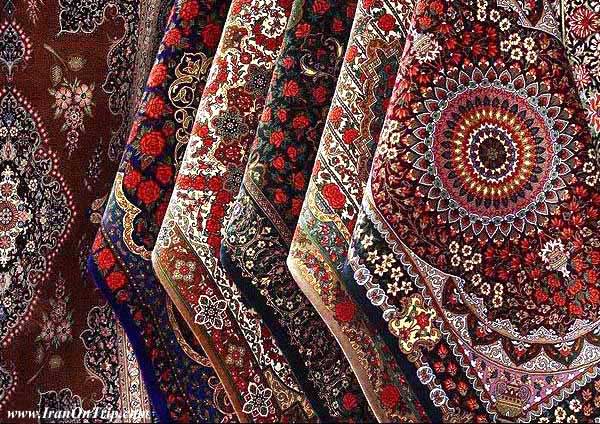 Since the distant past, Iranians have been the pioneers in the art of weaving elegant carpets. Dating back to the 5th-century BC, the peerless Pazyryk Carpet was found in the graveyard belonging to one the kings of the Scythian. The patterns on the carpet are reminiscent of the bas-relief of the Achaemenid dynasty and many researchers believe that the current carpet is the same as the ones in the Achaemenid palace, weaving-style wise. What makes Iranian carpet distinct from the others is the elegancy in weaving, variety in drawing and pattern, and natural dying.
The Persian Carpet(Rug) is an essential part of Persian art and culture. Carpet-weaving is undoubtedly one of the most distinguished manifestations of Persian culture and art, and dates back to the Ancient Persia (c.500 BC). The art of carpet weaving in Iran has its roots in the culture and customs of its people and their instinctive feelings. Weavers mix elegant patterns with a myriad of colors. The Iranian carpet is similar to the Persian garden: full of florae, birds, and beasts.The colors are usually made from wild flowers, and are rich in colors such as burgundy, navy blue, and accents of ivory. The proto-fabric is often washed in tea to soften the texture, giving it a unique quality. Depending on where the rug is made, patterns and designs vary. And some rugs, such as Gabbeh, and Gelim have a variations in their textures and number of knots as well.The exceptional craftsmanship in weaving these carpets and silken textile thus caught the attention of the likes of Xuanzang, Jean-Baptiste Tavernier, and Jean Chardin.In the words of Arthur Pope: "All around the world, Iranian carpets are the symbol of poetical luxury."Read more 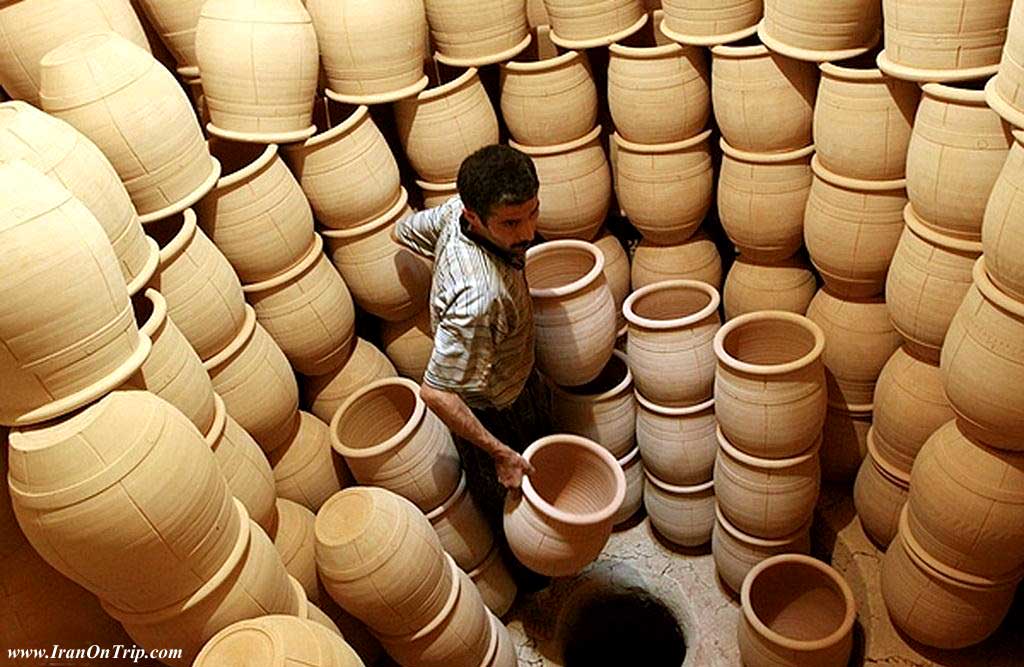 Pottery is one of the most ancient types of Iranian art and after paintings in caves, it is the oldest type of human art. In Iran, the excavations in a place called “Ganj Darreh”, i.e. Treasure Valley, in Kermanshah province, has reached to the oldest pottery dating back to 8000 BC.
Pottery stands witness to the civilization process and each nation has had specific patterns, signs, symbols, and decorations for their pottery. During the year 5000 BC, geometric patterns appeared on the pottery and after that the potter’s wheel gave way to creating more stylish ones and thanks to the furnaces, more colors were given to them. The first type of glazed pottery was made during the Elamites discovered from the excavations in Tchogha Zanbil. Pottery has undergone a lot of changes and during different ages, various colors and patterns have been applied to it. Museums are replete with unique samples from pre- and Islamic era.Iranian Pottery production presents a continuous history from the beginning of the Iranian history until the present day.Prominent archeologist Roman Ghirshman believes "the taste and talent of this people [Iranians] can be seen through the designs of their earthen wares".Of the thousands of archeological sites and historic ruins of Iran, almost every single one can be found to have been filled, at some point, with earthenware of exceptional quality. Thousands of unique vessels alone were found in Sialk and Jiroft sites.The occupation of the potter ("kuzeh gar") has a special place in Persian literature.

Says writer Will Durant: "Ancient Iranians with an alphabet of 36 letters, used skins and pen to write, Instead of ear-then tablets". Such was the creativity spent on the art of writing. The significance of the art of calligraphy in works of pottery, metallic vessels, and historic buildings is such that they are deemed lacking without the adorning decorative calligraphy. It is believed to be one of the most eye catching and fascinating manifestations of Persian culture.Illuminations, and especially the Holy Quran and works such as the Shahnameh, Divan Hafez, Golestan, Bostan et al are recognized as highly invaluable because of their delicate calligraphy alone. Vast quantities of these are scattered and preserved in museums and private collections worldwide, such as the Hermitage Museum of St. Petersburg and Washington's Freer Gallery of Art among many others. Shekasteh, Nasta'liq, Naskh and Mohaqqaq are some of the styles of Persian Calligraphy.Read more The Tile work is a unique feature of the blue mosques of Isfahan. In the old days, Kashan(kash + an which literally means "land of tiles") and Tabriz were the two famous centers of Iranian mosaic and tile industry.Read more 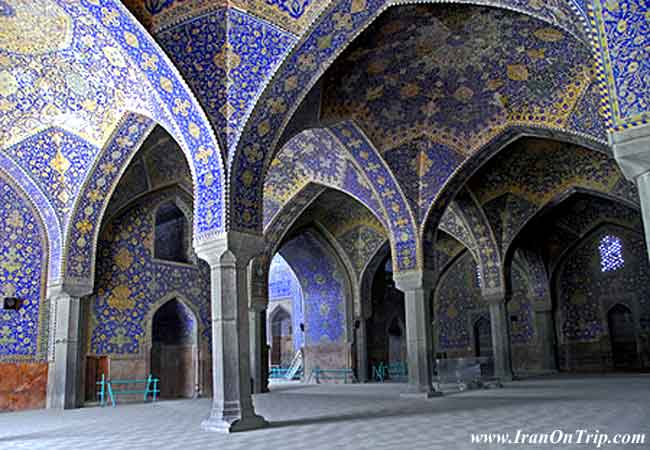 The architecture of Iran is one with an exceedingly ancient tradition and heritage. As Arthur Pope put it, "the meaningful Impact of Persian architecture is versatile. Not overwhelming but dignified, magnificent and impressive".
The main building types of classical Iranian architecture are the mosque and the palace. The architecture makes use of abundant symbolic geometry, using pure forms such as the circle and square. Plans are based on often symmetrical layouts featuring rectangular courtyards and halls. The post-Islamic architecture of Iran draws ideas from its pre-Islamic predecessor, and has geometrical and repetitive forms, as well as surfaces that are richly decorated with glazed tiles, carved stucco, patterned brickwork, floral motifs, and calligraphy. Metalwork has been used for millennia. It may be utilized for ornamental, domestic or practical purposes. In ancient times primarily copper and bronze were used. The royalty and very rich used gold and silver. Most common modern items are tea sets, bowls, trays, vases, and jewelry.
Metal engraving is the art of creating engravings on metal objects with special styluses and the hitting of hammers. The objects used for such a purpose were mostly gold and silver but, nowadays, copper and brass are used instead. The art roots in pre-Achaemenid era and during the first millennium BC, metal engraving was of great importance. Nowadays, invaluable engraving works such as the Golden Goblets of Marlik. Matchless works belonging to Achaemenid and Sasanid era have been excavated as well. The unique features of engraving works in form of reliefs on gold and silver of the Sasanid era are the winged animals, head of lion and dragon, different types of flowers and birds, the dancers, music instruments, and fighting and hunting ceremonies. During the next eras, no significant change was seen in the relief types and the patterns are mainly in form of the arabesque, flowers, birds, animals, Isfahan, etc.; however, in the Islamic era the cuneiform was replaced by Islamic scripts and calligraphy. Isfahan has always been the center for metal engraving art.Read more 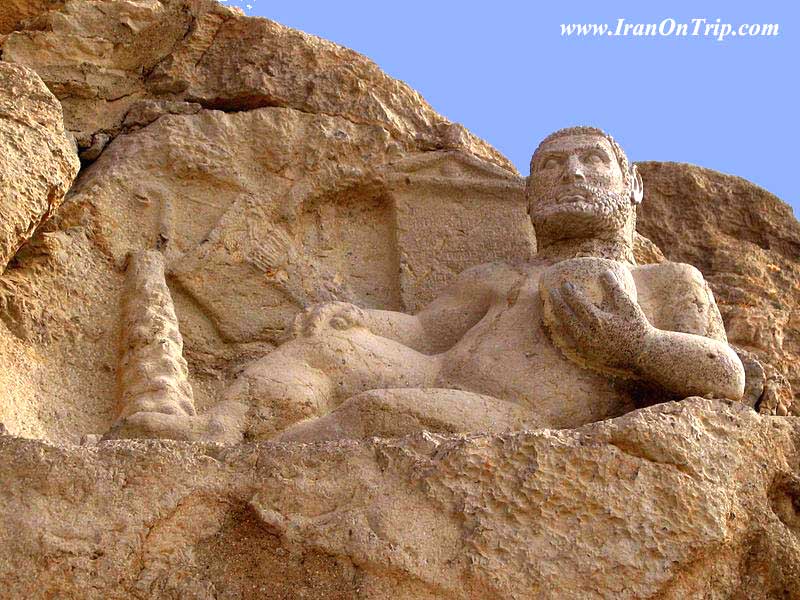 Relief carving has a history dating back thousands of years. Elamite relief are still to be found in Iran with Persepolis being a mecca of relief creations of antiquity. The music of Iran has thousands of years of history dating back to the Neolithic age as attested by the archeological evidence chiefly in Elam, one of the earliest world civilizations in the south western Iran. During the course of Iran's recorded history, a unique distinctive music developed accompanied by numerous musical instruments, several of which came to be the first prototypes of some modern musical instruments of today.
Persian traditional music in its contemporary form has its inception in the Naseri era, who ordered the opening of a "House of Crafts", where all master craftsmen would gather for designing instruments and practicing their art. Persian Symphonic Music has a long history. In fact Opera originated from Persia much before its emergence in Europe. Iranians traditionally performed Tazeeieh, which in many respects resembles the European Opera. The cinema of Iran (or Persian cinema) is a flourishing film industry with a long history. Many popular commercial films are made in Iran, and Iranian art films have won many international film awards, and festivals of Iranian films are held annually around the globe. Along with China, Iran has been lauded as one of the best exporters of cinema in the 1990s.
Many critics now rank Iran as the world's most important national cinema artistically, with a significance that invites comparison to Italian Neorealism and similar movements in past decades. 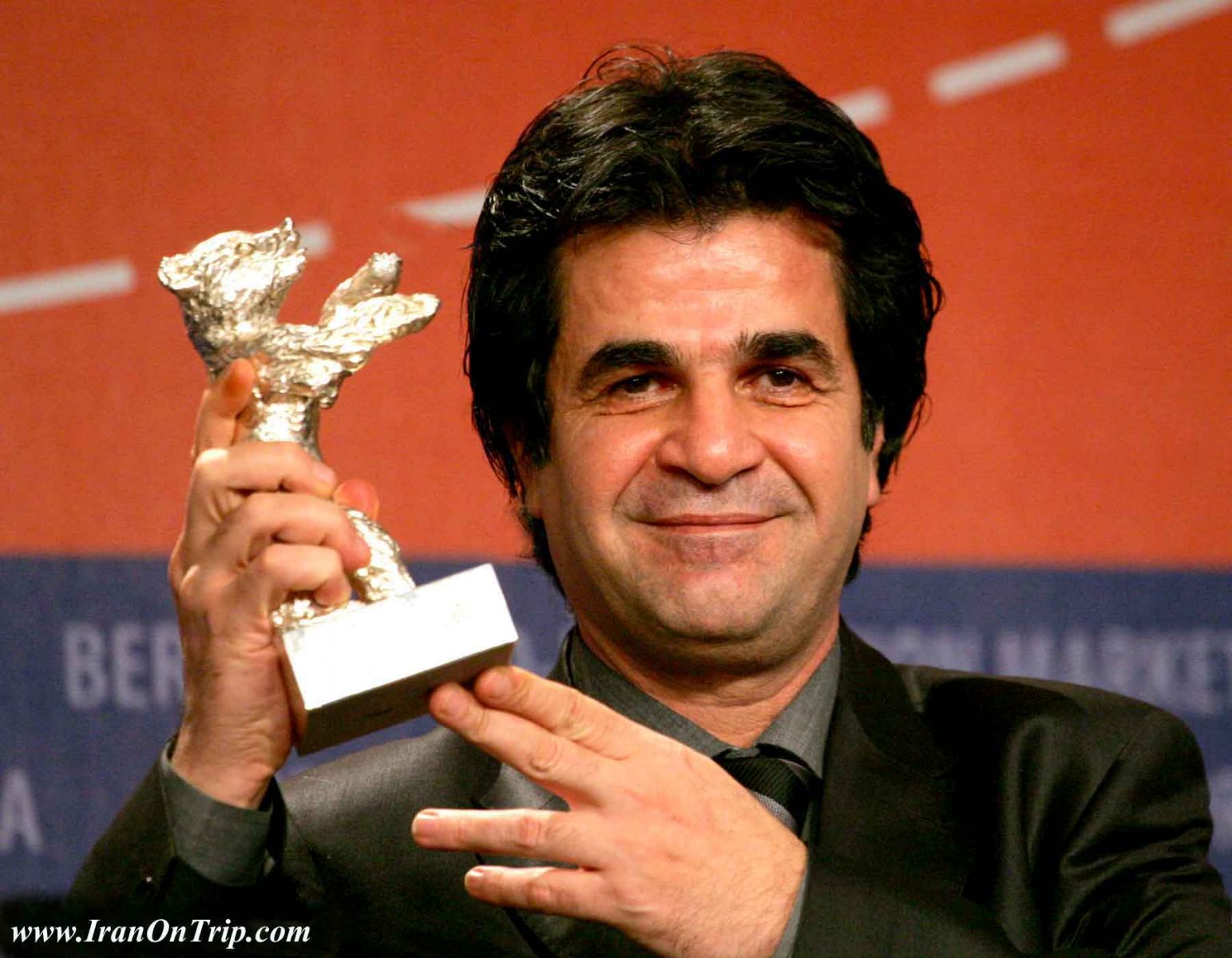 World-renowned German filmmaker, Werner Herzog, along with many film critics from around the world, has praised Iranian cinema as one of the world's most important artistic cinemas. Persian literature is by far the most stalwart expression of the Iranian genius. While there are interesting works in prose, it is poetry where the Iranian literature shines at its most. Flourishing over a period of more than a millennium, it was esteemed and imitated well beyond the confines of the Iranian homeland. The literature of Turkey and India developed under its influence. Persian poets such as Sa'di, Hafiz, Rumi and Omar Khayyam are well known in the world and have influenced the literature of many countries.