E-Mail
I want to receive news on my email
Poll
What do you think of Iran on trip website?
The World's Oldest Hotel in Isfahan Abbasi 5* (300 years ago) 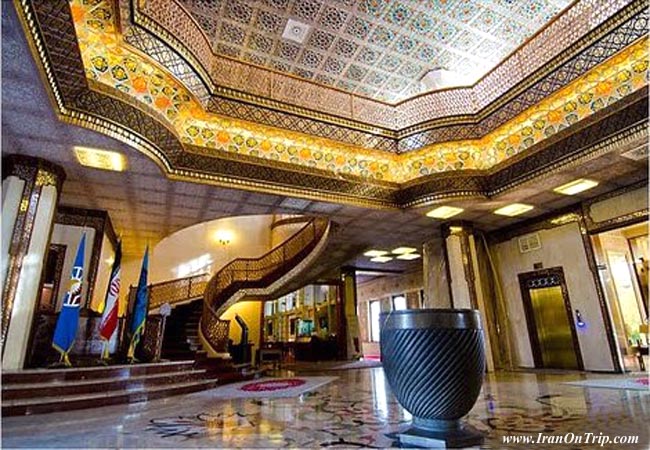 The glorious architecture of Iran, like a piece of gem, has been constantly glittering among other architectural monuments of the world and has occupied a worthy place in the world of art. It was in the reign of the Safavids, that the city of Isfahan reached such a renown and elegance which was called " half of the world".
Among what has remained from the age of the Safavids, there still exists a complex of a school, bazaar and caravansaraycomplex which sparkles like a piece of jewelry at the side of Chahar Bagh street.
This complex was built at the time of king Sultan Hossein of Safavids about 300 years ago. King Sultan Hossein attributed this magnificent complex of building to his mother. That is why; it is called "the school and caravansaray of Madar-shah" (which means king's mother).

Along with economical prosperity in the Safavids age, the construction of utilitarian monuments such as bazaar, bridges, dams, pigeon towers, water supplies, inns, mosques and schools was the vogue of time. The caravansaries did not just provide lodging for the passengers and passers-by or were not centers of loading or landing of the caravans. The urban caravansaries were appropriate places for storing goods and commercial exchanges.
In reconstruction of the caravansaries, the main attempt has been to preserve the general shape. Madar-Shah caravansaray likewise owns a square courtyard in the middle, each side of which amounts to eighty meters. In reconstruction of this caravansaray, this dusty courtyard has changed into a garden imbued with plants and colorful flowers. A stream flows through this courtyard, which is called Farshadi stream. At each side of this courtyard is located a verandah at the two sides of which are aligned two-storey chambers.
Simplicity and strength of this building with its open pleasant area is reminiscent of the glory and grace of Naghsh-e-Jahan square which is the precious treasure left from the Persia of the Safavids periods.
At this time, according to the suggestion of Andre Goddard who was then the counselor of Archeology Bureau, Iran Insurance Company came to save the monument. The company consented to the alteration of the caravansary to a hotel and approved of the plan of the hotel building which was later called King Abbas hotel (1336 A.H). In this way, not only was a valuable historical monument saved but also the memory of its first use as the lodging of the passengers and tourists was preserved in the new form it assumed. Besides, a scenic and elegant space was provided for the tourists in such a celebrated city as Isfahan. Now, the gurgling of water and the color of Persian gardens, images from the grandeur of Islamic architecture, the eloquent artistic designs carved on the forehead of the lofty walls and verandas, the landscape of the picturesque turquoise dome of Chaharbagh Madresseh are images which are printed on the minds of the guests as such that these images can hardly ever be consigned to oblivion.
The company finally started the construction of the hotel in the summer of 1337 and finished it at the end of 1345. In reconstructing the caravansary, they were committed to two objectives: The preservation of the originality of the outward facade and the renovation of the caravansary's chambers and remodeling them into the hotel rooms.
In 1351, Iran Insurance Company decided to expand the hotel. The expansion was possible only at the eastern side. Thus, by purchasing 11500 square meters of land at this side, the annex or adjacent section of the hotel was built which can be considered an independent and well-furnished hotel by itself. By passing more than 30 years from hotel servicing, most sections of the hotel had been ruined and needed reconstructions. After inspections of engineers, the reconstruction of the hotel in many phases started at first months of 1374 and ended at first months of 1379. The above actions include the reconstruction of rooms, halls, kitchens, and engine houses, electrical and mechanical installations of hotel.
The interior decoration of Abbasi hotel is endowed with such a high quality and quantity, each part of which deserves due attention and description. 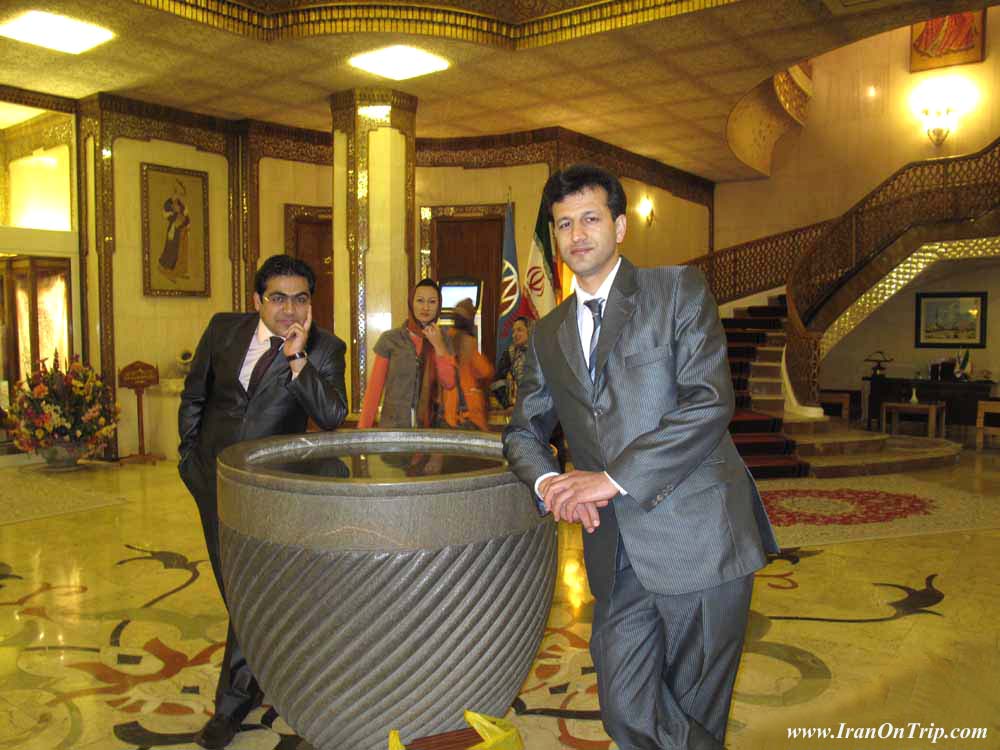 Chehelsotoun Hall
The large restaurant of the hotel whose two floors have the capacity of catering one thousand people, is in fact a museum of painting, illumination, mirror encrusted stalactites, and plaster moulding which are imitated from artistic masterpieces of Qajar and Safavid periods. The ceiling of this restaurant is modeled after fretworks of the ceiling of Chehelsotoun's Verandah; it only differs from Chehelsotoun in that the ceiling of Chehelsotoun is made of wood, whereas the ceiling of the restaurant, with the same very plan has been plaster moulded and painted. In the middle of the ceiling, one concrete plane is set up which is embellished with colored glasses and the stars in the space between its cadres are adorned with mirror works. The decorations of the restaurant's ground floor are made entirely in the style of the Safavids.
Twenty-three exquisite paintings, the masterpieces of Master Shajanian, cover thirty square meters of this floor. Across the entrance door, a fine hearth catches one's eyes. To build it, the craftsmen have employed the original techniques of Layehchini and illumination. In the two sides of this exquisite fireplace, under the stairs, and around the entrance door of the restaurant toward the kitchen, there are painted doors each of which is an intricate and fine work. Being attentive, one can detect various designs, portraits and miniatures in them. The paintings of all these doors are the works of the great Iranian artist Master Sanaei. The designs and mirror works of the above floor of the restaurant are based on the style of the Qajar. The designs of Gol va Morgh (flowers and birds) are all the masterpieces of the late artist Seyyed Jafar Rashtian. The portraits and the huge tableau on the right of the entrance door of the breakfast restaurant, which has more than fifty portraits, are the masterworks of Master Ebrahim Jabbar Beik. In the space between the upper floor of the restaurant and the corridor rooms of the first floor of the hotel, a small hall is located whose walls are carefully decorated with Tongbori and moqarnas. In one side of this hall, there is an antique piece both sides of which are decorated with mirror encrusted stalactites. There is also a painted glass, which has remained from the Qajars, and which is one of the exquisite pieces ever created. In order to harmonize these works with Qajar School of art, the designers have put up three pairs of painted Qajar doors; these doors have been fixed after repairment, refinement and paintings of their frames. These doors endow this floor with a special grandeur and grace. To create a harmony between Persian original embellishment, on the one hand, and the stone walls and acoustic ceilings which were already constructed, on the other, wooden cartouches with gilded acoustic pieces of the ceiling like antique golden frames, strips have been fixed over the pieces and then painted. The velvet covered seats of the restaurant, modeled after the engravings of Perspolis Zarrin Hall
This hall is located in the ground floor of the hotel and its entrance door opens to the corridor of the restaurant. The walls of this hall are light green and on these walls the most astonishing samples of illumination, delineation of Safavid Cathy designs, and the plaster moulding on the mirror can be seen. Only for the illumination and layechini of this hall, twenty thousand sheets of gold known as Indian (Hindi) have been used. The coverage of the walls and the ceiling with gold sheets are meant to preserve the varnish and gloss, which may be otherwise gradually tarnished.
The surface ofthisgolden cover has been delineated. The surface of the plane mirror cartouches are plaster moulded, the moulded designs are coated with Indian gold, and are finally delineated. In this hall, about 200 square meters of plane mirror is put up. An antique latticework with colored glasses is one of many wonderful decorations of this hall. The style of this hall is originally Safavid, but as far as the composition and harmony are concerned, it has traces of Saljuk arcades, too.

Abbasi Hall
This hall is equipped with all modern audio _visual devices, which are used both for local conferences and for international conventions. The large conference hall is constructed in two storeys. The ceiling of first floor is decorated with plaster moulding on convex mirrors and its walls are embellished with wooden fret works whose surface are painted and are decorated with the same designs of the ceiling.This work is done so dexterously that at the first sight the distinction of the wooden works from the plaster mouldings is almost impossible. The ground floor of this hall which, is considered the main assembly hall, is equipped with an apparatus of simultaneous translation. Also it contains 500 seats. The ceiling of this hall is decorated with seventeen wooden moqarnases, which are in turn decorated with plaster moulding , mirror encrusted stalactites and painting.
The spaces between wooden moqarnases are plaster moulded and painted. Around the hall, in the upper parts of the walls, is decorated with plaster rows and the walls are arcade with Saljuk designs. 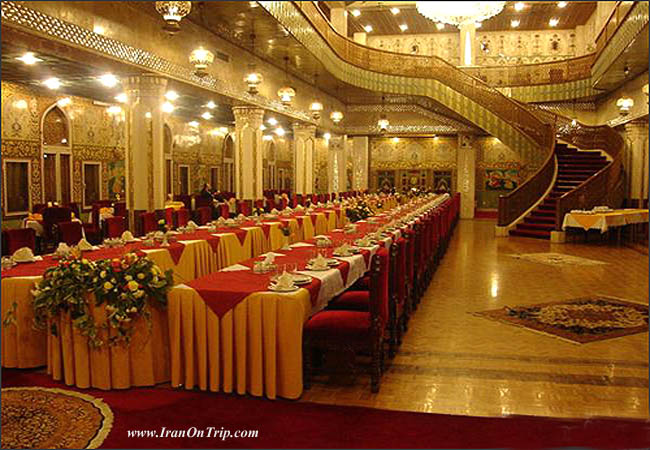 Chehel-sotoon Restaurant
This big and magnificent restaurant has two floors, and also a unique decoration. It has a capacity of 400 people. The second floor is used as the breakfast hall every day from 7:00 to 10:00 where you can have breakfast as a buffet. The ground floor is used as the main restaurant for lunch all the year from 12:00 to 15:00 ,and for dinner in autumn and winter from 16:00 to 22:30. You are served with different Iranian and continental foods.

Coffee Shop
The coffee shop is located in the main lobby. We serve you there with different drinks and foods (hot and cold) in a very enjoyable atmosphere. It is open 24 hours.

For more information
The Traditional Teahouse
It is located on the north side of the garden, in a unique atmosphere. We welcome you in spring and summer outside, and in autumn and winter inside the teahouse, from 18:00 to 23:00.

Naghshe – e – Jahan Restaurant
It is located across from Zarrin Hall and next to Chehel-Sotoon restaurant . It has nice paintings and mirror decorations. With a capacity of 100 persons, it is used for serving at breaks and also lunch and dinner in case there are meetings and conferences.

Ali Quapoo Restaurant
It has beautiful gildings and plaster moldings dating back to Safavid era. With a capacity of 30 persons,this restaurant is suitable for ceremonies and private meetings.

Zarrin Restaurant
It has paintings in arabesque style as well as gilding style. This restaurant can hold up to 100 people and is suitable for serving at breaks and even lunch and dinner.

The Garden "Restaurant and Coffee Shop"
In the garden of the hotel you are served with Iranian and continental foods, hot and cold sandwiches and different drinks, during spring and summer. You can listen to a pleasant music around some beautiful pools and you can also see the blue dome of Madreseh Chahar-Bagh.

Cheshm –Andaz Restaurant
With a view of the beautiful city of Isfahan ,it is located on the roof of the hotel. From there, you can also see Chahar-Bagh School, Imam Square, Ali Quapoo, Imam Mosque and Mount Sofeh. This restaurant is open in spring and summer from 7 pm to 11 pm.