E-Mail
I want to receive news on my email
Poll
What do you think of Iran on trip website?
Festival of Rose and Rose Water 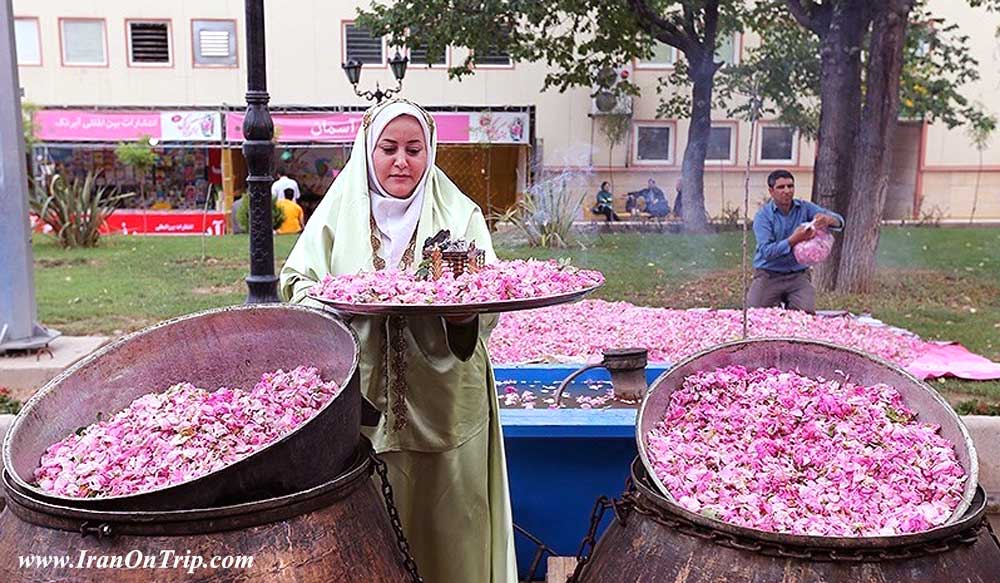 Every year during the second half of May, festival of Rose and Rose Water is being held in Kashan. Many people from different parts of the country and abroad visit Kashan, the hub of Mohammadi Rose in Iran.The season for picking rose and preparing rosewater is from early May to mid-June.
In early May, the scent of rose spreads over different areas of Kashan, such as Qamsar Joshqan Qali, Barzak and Niasar.The ceremony for making rosewater in Kashan attracts many tourists. Every day, some 80,000 people tour various cities of Kashan for this traditional ceremony. 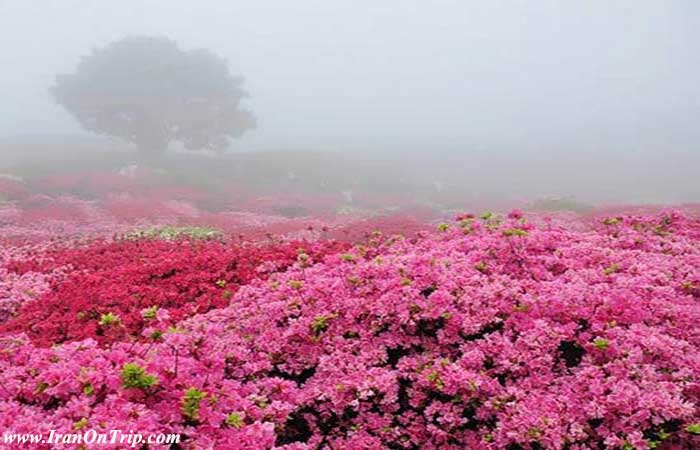 The arrival of tourists in the districts of Kashan has a positive impact on the region’s economy.
Rose water is made from a very sweet smelling kind of rose and is used in various traditional dishes and sweets. It is also used as a perfume among Muslims. Although some modern mechanized factories are constructed, but still a large part of this, let say industry, is done traditionally. And this traditional rose water production which is established at homes or gardens attracts tourists to Kashan. Historical monuments and architecture of Kashan adds to the popularity of this festival too. 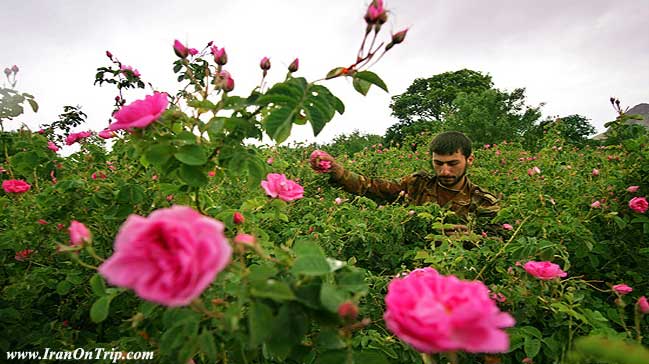 The people of Ghamsar collect roses, boil them in special pots and collect their water in beautiful containers. It is a pride for the city that each year, the most sacred place on earth, Kaaba (Mecca), is washed with rose water from Ghamsar.
The ancient city of Ghamsar is like a shining star on the central Iranian desert.Surrounding mountains encircle it like a ring and protect its rose gardens against the heat of the desert. The environment of this garden city, the shade of trees and sound of flowing water in addition to music of birds and nightingales and fragrance of roses, has created an incredible milieu on the side of the desert. The garden city of Ghamsar is a patch of Paradise which becomes colorful as the spring begins. Its beauty is doubled when rose water ceremony commences and its hospitable people play host to millions of people who love nature and rose water of Ghamsar.
Mohammadi Rose (Rosa damascene or Damask rose) is among the most important roses in the world and among the most famous plants.
Because of its extraordinary fragrance and diversity, this flower is planted in many parts of the world. The flower has applications in food, medicine and perfume industries. 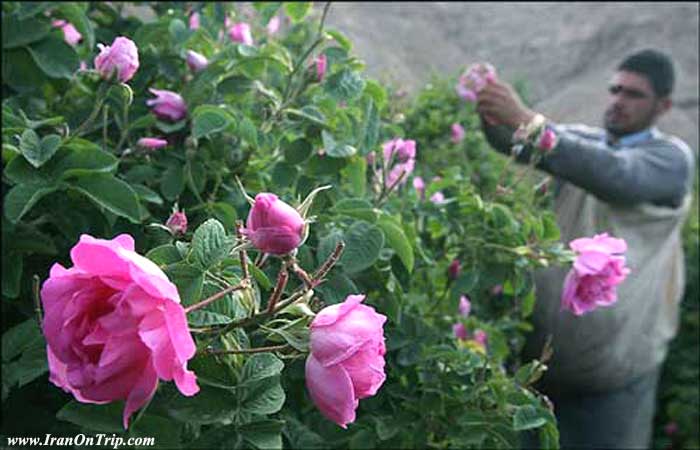 Production of rosewater in Iran dates back to over 2,500 years. At present, Mohammadi Rose is produced in Bulgaria, Turkey, Iran, India, Ukraine, the US, Canada, France, Britain and Japan. The first four countries are pioneers in the production of this flower.In Iran, Mohammadi Rose grows in the provinces of Fars, Kerman, Isfahan as well as East and West Azarbaijan. 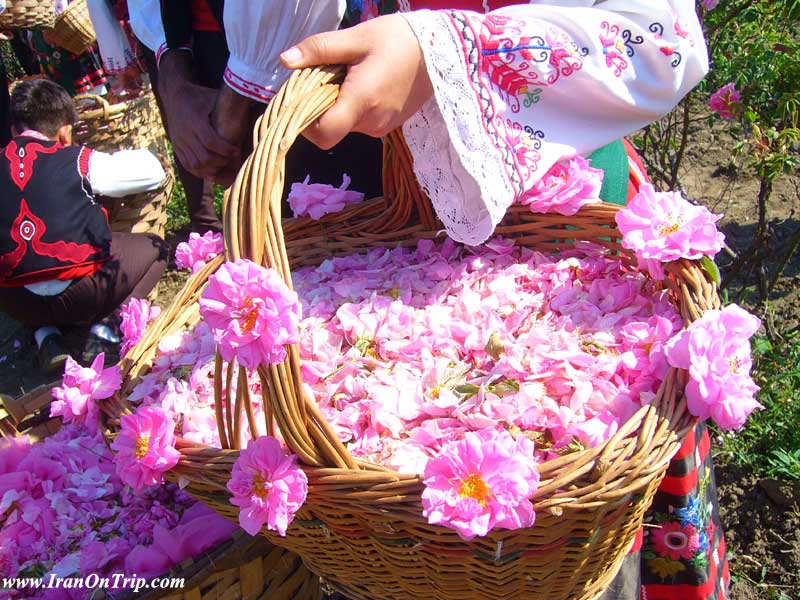 The red rose, or Mohammadi rose, is further divided into seven groups: French red flower, wild rose, tea flower, miniature red flower, Bengalese red flower, and Iranian red flower. Out of all rose species, the Iranian red flower or Mohammadi flower is unique and most botanists have opined that it has been first planted in Iran and then taken to other countries.
Experts maintain that Ghamsar has been a place for producing flower and rose water since a long time ago. Some believe that under Malekshah the Seljuk, when Miyandeh Mosque of Ghamsar was built, representative of an East Roman officials picked some roses from the slopes of Kouh Asbi mountain near Ghamsar and took them to Damascus (which was called Damask in those times) to be grown. This is why Iranian red flower is sometimes called Damask rose in English. 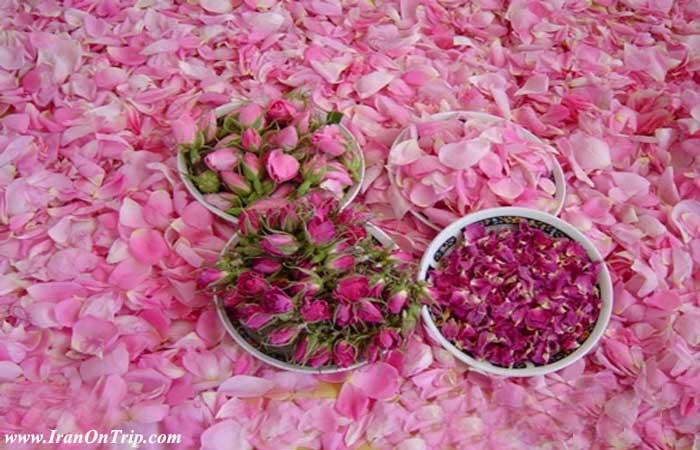 Although production of plant essences has a long history in Iran, but traditional rose water production machines were used to produce rose water for commercial purposes. Before that, rose water was produced through small distillation equipment for local uses. Anyway, production of rose water has been in vogue since ancient time and has sometimes led to prosperity of copper, glass making and packaging industries. Most of the local product is exported to other parts of the country and, therefore, despite most handicrafts, it has held its ground in contemporary times and has constantly improved in terms of quality and quantity.
Another outcome of that situation was spread of the industry to neighboring villages of Ghamsar and even to other provinces during past decades. The emphasis put on Ghamsar is due to high quality of its rose water which results from natural conditions of the city.
The city has been and still is the main production center for the highest quality rose water as a result of its natural and climatic conditions. According to a study carried out by professors of Tehran University, the essence of Mohammadi flower of Ghamsar and the subsequent rose water has a concentration of 35 mg per 100 ml or 350 ppm, which makes it the finest and highest quality rose water in Iran and even in the world. 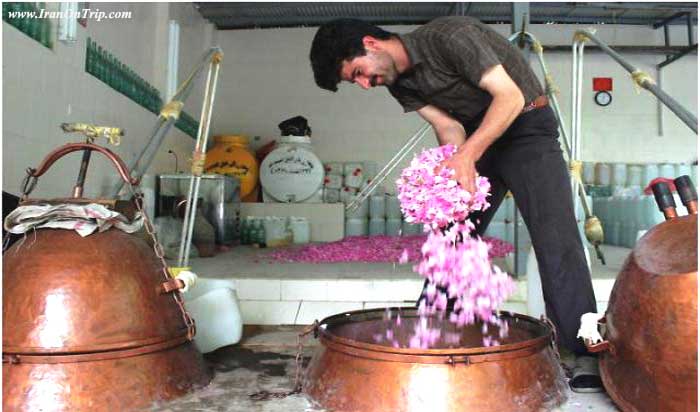 Equipment used for extraction of rose water in Ghamsar is nearly traditional and has hardly changed over the years. They include:
1. A copper pot with a capacity of 120-150 liters;
2. A big clay pot, which has not been replaced by the copper pot and is used to cover the pot. A major advantage of clay pot was that it did not burn the fragrance of the flower;
3. A copper pitcher with handle and a capacity of about 30-40 liters which is put in cold water, so that flower streams are turned into liquid;
4. Four wooden canes which are attached to each other to connect the pot to the pitcher; today, they use aluminum pipes instead of those canes;
5. A water pool where liquefaction is done; and
6. Heating equipment under the copper pot which is usually fed by oil or diesel fuel. In the past they used wood and bushes to warm it up.

First the copper pot is put on an oven made from bricks and cement or stones and mud. The heating agent is put below it. Then up to 30 kg of rose petals are poured into the pot and 80 liters of water is added. The pot is then covered and a heavy weight is put over it to control steam pressure. Probable holes and cracks are covered with a mortar made of the remnants of boil flowers and bread dough to prevent loss of steam.
Instead of weight and dough, they use elastic washers, screws and levers. The copper pitcher is put into the water and is kept in place by a ladder, or more recently, by cast iron pipes, so that, it will not rise to the surface of the water. Then canes or aluminum pipes are inserted into the pot, on the one side, and into the pitcher, on the other side and they wrap it in a piece of fabric with a cotton ball, so that, water would not penetrate into the pitcher. Water or any other foreign object will ruin the rose water. 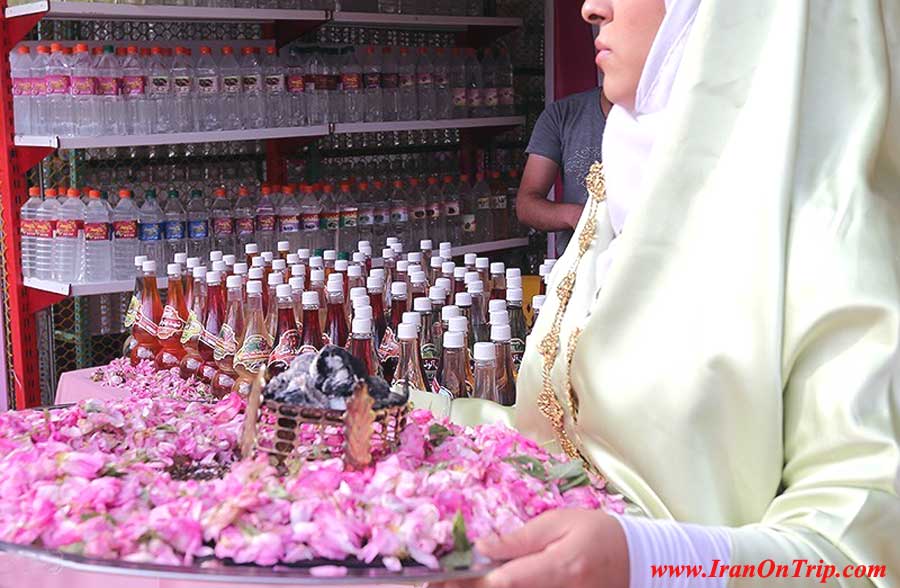 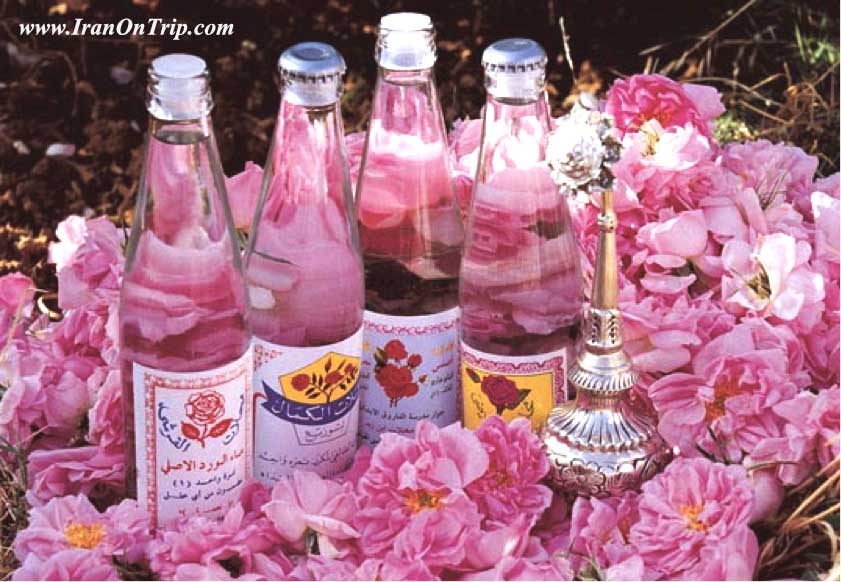 Due to containing tannin, gallic acid, essence, fatty acids, pigments and ascorbic acid (vitamin C), petals of Mohammadi flower are used not only for production of rose water and essence, but for production of rose petal jam.Since a long time ago, this plant was used in traditional medicine to treat various diseases including chronic diarrhea, rheumatic pains, blood abnormalities, and sore throat.
The part of the flower, which is used to produce rose water and essence, is petals. Boiled petals of Mohammadi flower are alkaline and constitute a good remedy for stress, flatulence, and abdominal colic. The boiled petals are also used to fight depression and to treat palpitation, insomnia, ordinary and bloody diarrhea, sickness, and inflammation.In the past, rose water was used in traditional Iranian medicine to treat rheumatic heart disease, to strengthen gastric nerves, and to treat some forms of headache and sickness.