E-Mail
I want to receive news on my email
Poll
What do you think of Iran on trip website?
Neurergus Kaiseri (Salamander) 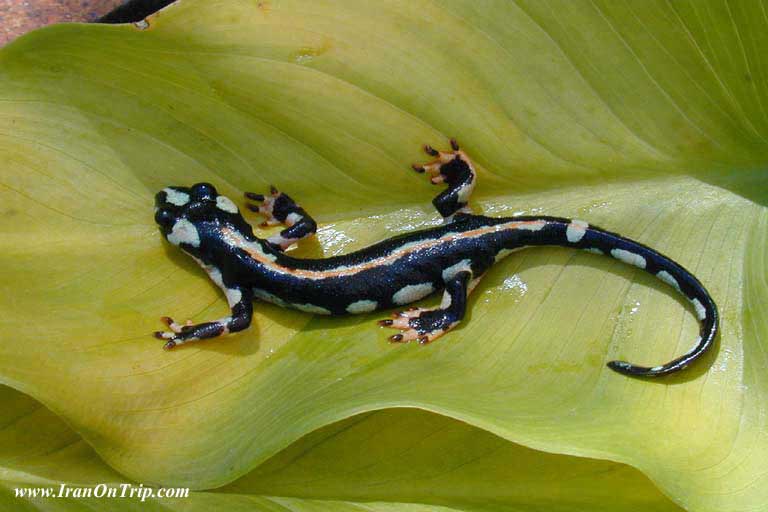 Everyone knows the tiger, the panda, the blue whale, but what about the other five to thirty million species estimated to inhabit our Earth? Many of these marvelous, stunning, and rare species have received little attention from the media, conservation groups, and the public. This series is an attempt to give these 'forgotten species' some well-deserved attention.
The salamander was a mythical creature before it was a real one: the word salamander means a legendary lizard that both survived-in and could extinguish fire. A creature that the Ancient Greeks, including Aristotle, appeared to readily believe in.
No one knows how the term salamander transferred from a mythical fire-dwelling monster to the small amphibious animals it applies to today. Perhaps the sight of salamanders like Luristan newt—charcoal-black and flame-orange—caused people in the seventeenth century to lend the name of myth to the taxa.  Native to a tiny river region in the Zagros mountains of Iran, the Luristan newt Neurergus kaiseri stuns everyone who works with it.
Neurergus-kaiseri-Iranian-salamanderNeurergus kaiseri is the smallest of the Neurergus species, with an adult length of 10-14 cm. Sparreboom et al. (1999) describe the coloration of this species as "unique and rich in contrast, with a mosaic of black and white patches and orange-red dorsal stripe, legs and belly."
The sexes can be differentiated by the anatomy of the cloaca, with the male having an enlarged, rounded cloacal region, and the female having a volcano-shaped cloaca. However, these differences are clearly visible only during the breeding season. Outside of the breeding season, it may be impossible to distinguish between the sexes.
The morphology of the skull and vertebrae reveal significant differences between N. kaiseri and N. strauchii, but greater similarity between N. kaiseri and Triturus alpestris. Evolutionary analysis based on DNA reveals that the 4 Neurergus species are monophyletic (a single lineage), and their nearest relatives are the Triturus and Euproctus.

Natural Range and Habitat
N. kaiseri are native to the Luristan Province of Iran, at an altitude of 750-1200 m (2400-4000 ft). Unlike the other Neurergus, which live in cold climates and inhabit cold mountain streams, N. kaiseri come from a hot dry climate. They reproduce in winter during periods of rain, which are followed by long periods of hot dry weather in which the animals estivate. It is estimated that water is present in their habitat for 3 months of the year or less. Unlike the other Neurergus, N. kaiseri are reported to use ponds and vernal pools, in addition to streams. However, their wild habitat has not been well studied.

Behavior and history in captivity
N. kaiseri have a reputation for being a shy, skittish species. Their movement on land resembles that of lizards more that that of typical salamanders. When aquatic, however, the animals usually lose their flighty behavior and may even beg for food. Wild-caught adults are generally more shy than their captive-bred counterparts. The animals generally avoid light and are active in low light and at night.
When terrestrial, the newts spend the day under the lower hides and at night will forage for food amongst upper hides and open spaces. They have a preference for perching high and are very active soon after the lights are turned out. The water dish is used frequently and the animals are often seen taking a quick soak. They are very gregarious towards one another and will often be found huddled together under a single hide. Intra specific aggression is not a problem.
In recent years (2005-2008) there have been illegal exports of N. kaiseri from the wild into the pet trade. Given the endangered status of the species, it is likely that this distribution of wild-caught animals has had a serious impact on wild populations. Many of these wild-caught animals have died from infections within a short time after purchase

Current Condition
As of 2005, the IUCN Redbook listed N. kaiseri as Critically Endangered. The Global Amphibian Assessment cites the following evidence: "its extent of occurrence is less than 100 km2, its area of occupancy is less than 10 km2, its populations are severely fragmented, and there is a continuing decline in the extent and quality of its habitat, as well as a decline in the number of mature individuals due to over harvesting for the illegal pet trade". It is believed that less than 1000 adults exist in nature.According to the Red List the population has dropped by 80 percent in less than a decade due to collection for the pet trade
In light of the endangered status of these animals, it is critically important that the animals now in captivity be bred, and that hobbyists resist the temptation to buy wild-caught animals. We hope that this care sheet will help in the establishment of stable captive breeding groups. We encourage all breeders to participate in studbooks and to correspond with other breeders.
The Luristan Newt is a candidate for CITES listing. There is also a breeding program for the Luristan Newt at the Sedgwick County Zoo. Iran is planning on starting its own breeding program.