E-Mail
I want to receive news on my email
Poll
What do you think of Iran on trip website?
Yazd Dakhma(Tower of Silence) 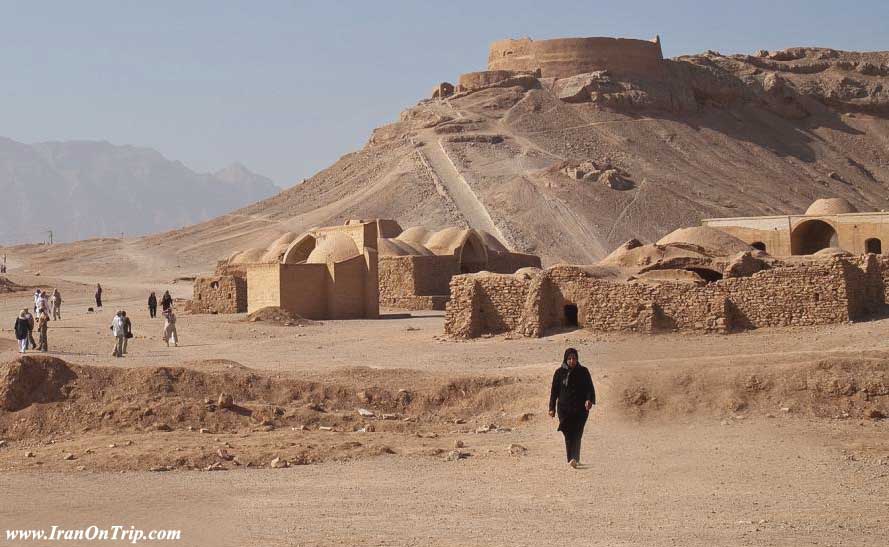 A Dakhma (Persian: دخمه‎) also known as "Cheel Ghar" in Hindi and "Tower of Silence" in English, is a circular, raised structure used by Zoroastrians for exposure of the dead, particularly to scavenging birds.
The type of construction is not specified by the name. The common dakhma or dokhma (from Middle Persian dakhmag) originally denoted any place for the dead. Similarly, in the medieval texts of Zoroastrian tradition, the word astodan appears, but today that word denotes an ossuary. In the Iranian provinces of Yazd and Kerman, the technical term is deme or dema. In India, the term doongerwadi came into use after a tower was constructed on a hill of that name. The word dagdah appears in the texts of both India and Iran but, in 20th-century India, signified the lowest grade of temple fire (cf. Fire temple). 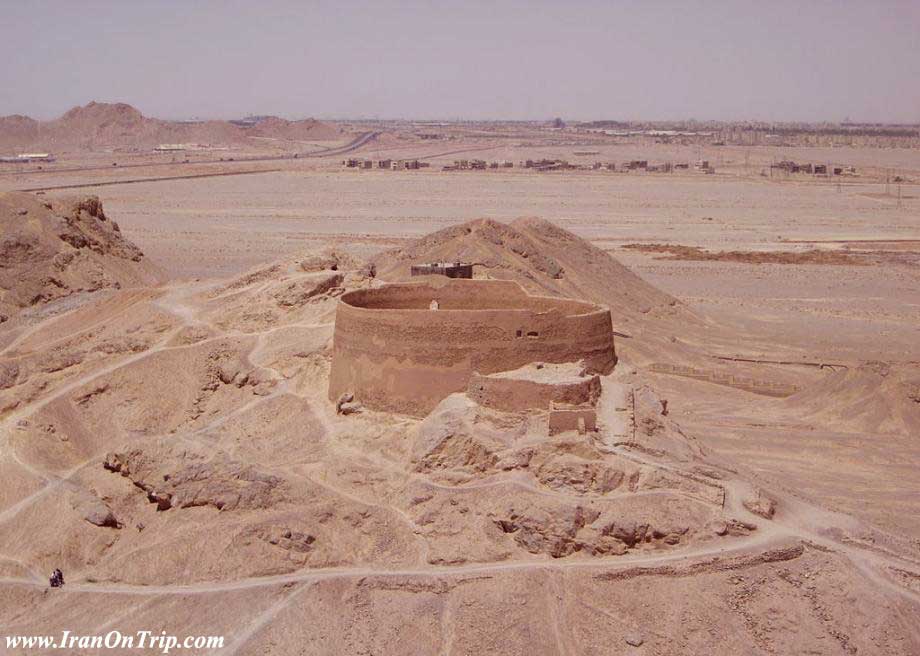 The term "Tower of Silence" is a neologism attributed to Robert Murphy, who, in 1832, was a translator working for the British colonial government in India. The phrase is not the literal meaning of "Avestan dakhma" as is suggested by the Encyclopædia Britannica. While the stem dakhma- does exist in the Avestan language, its meaning there is not conclusively established. The contexts in which it appears indicate a negative connotation and do not signify a construction of any kind.
Zoroastrian tradition considers a dead body—in addition to cut hair and nail-parings—to be nasu, unclean, i.e. potential pollutants. Specifically, the corpse demon (Avestan: nasu.daeva) was believed to rush into the body and contaminate everything it came into contact with, hence the Vendidad (an ecclesiastical code "given against the demons") has rules for disposing of the dead as "safely" as possible.
To preclude the pollution of earth or fire (see Zam and Atar respectively), the bodies of the dead are placed atop a tower—a tower of silence—and so exposed to the sun and to scavenging birds. Thus, "putrefaction with all its concomitant evils... is most effectually prevented." 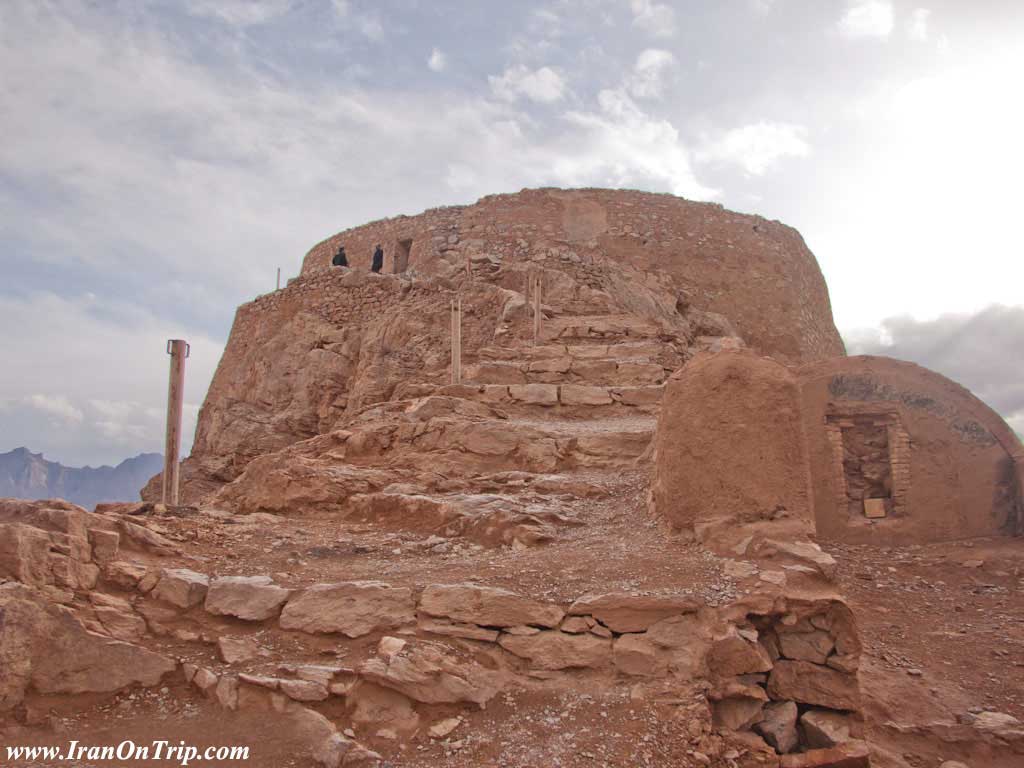 The towers, which are fairly uniform in their construction, have an almost flat roof, with the perimeter being slightly higher than the center. The roof is divided into three concentric rings: The bodies of men are arranged around the outer ring, women in the second circle, and children in the innermost ring. Once the bones have been bleached by the sun and wind, which can take as long as a year, they are collected in an ossuary pit at the center of the tower, where—assisted by lime—they gradually disintegrate, and the remaining material—with run-off rainwater—runs through multiple coal and sand filters before being eventually washed out to sea. The ritual precinct may be entered only by a special class of pallbearers, called nasellars, a contraction of nasa.salar, caretaker (-salar) of potential pollutants (nasa-). 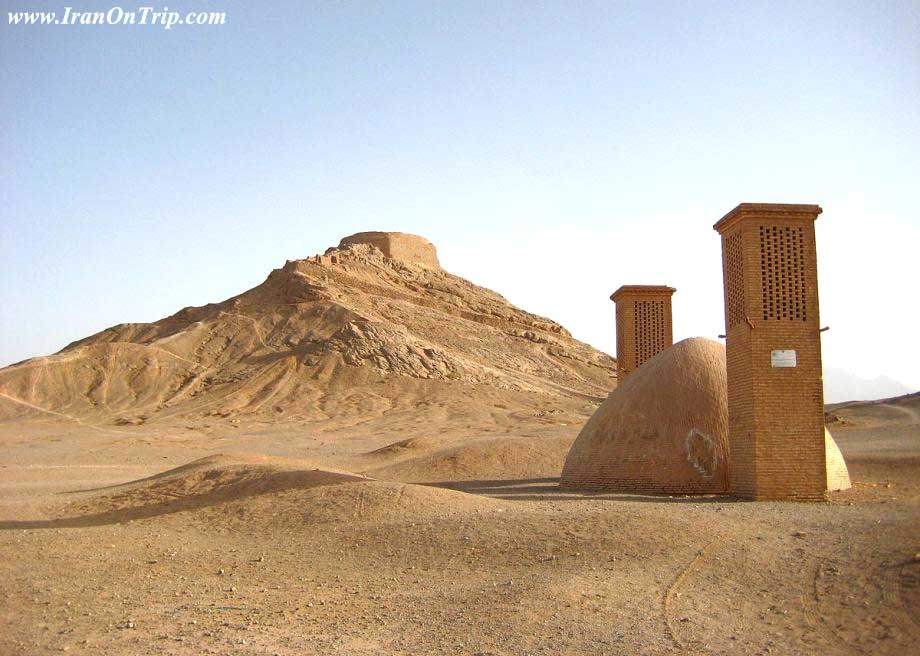 The earliest reference to ritual exposure comes from Herodotus (Histories i.140), where the historiographer describes the rites to have been secret, and "vaguely" that these first occurred after the body had been dragged around by a dog or bird. Further, the Magi (a term that eventually came to signify a Zoroastrian priest but may not have meant that in Herodotus' time) practiced this quite openly, before they finally embalmed the corpse with wax and laid it in a trench. 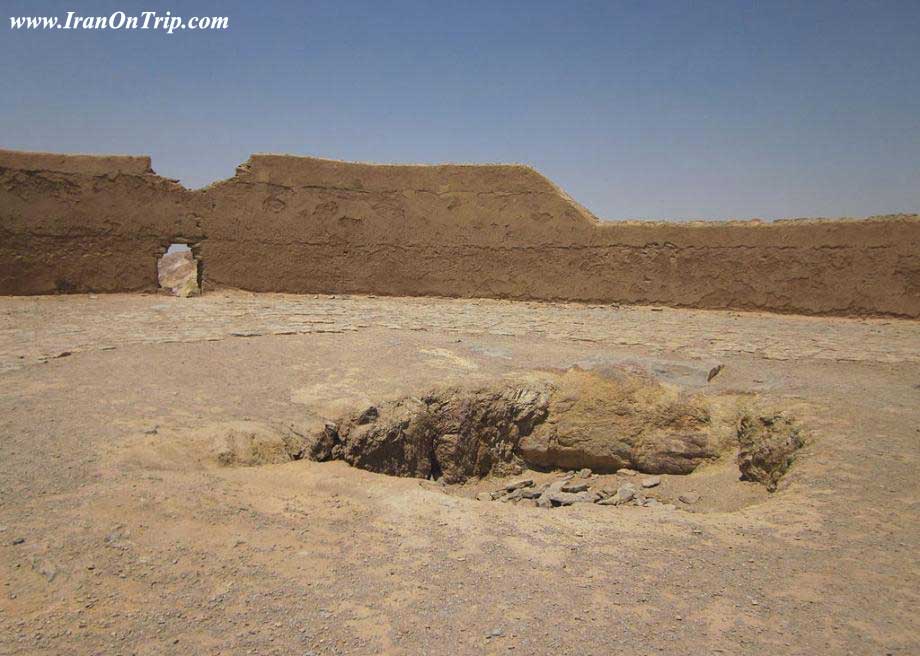 While the discovery of ossuaries in both eastern and western Iran dating to the 5th and 4th centuries BCE indicates that bones were isolated, that this separation occurred through ritual exposure cannot be assumed: burial mounds, where the bodies were wrapped in wax, have also been discovered. The tombs of the Achaemenid emperors at Naqsh-e Rustam and Pasargadae likewise suggest non-exposure, at least until the bones could be collected. According to legend (incorporated by Ferdowsi into his Shahnameh), Zoroaster is himself interred in a tomb at Balkh (in present-day Afghanistan).
While general exposure of the dead is attested from earliest accounts, the ritual customs surrounding that practice appear to date to the Sassanid era (3rd – 7th century CE). They are known in detail from the supplement to the Sayest ne Sayest, the two Rivayat collections, and the two Saddars. The use of towers is first attested in the 16th century. 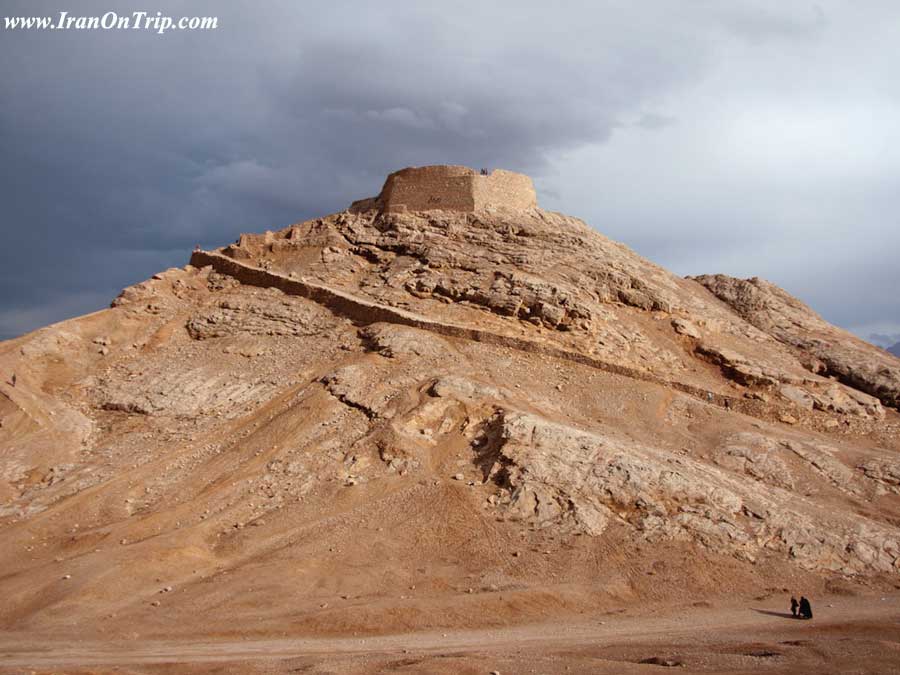 In Greater Iran
In the Iranian Zoroastrian tradition, the towers were built atop hills or low mountains in desert locations distant from population centers. In the early twentieth century, the Iranian Zoroastrians gradually discontinued their use and began to favour burial or cremation.
The decision to change the system was accelerated by three considerations: The first problem arose with the establishment of the Dar ul-Funun medical school. Since Islam considers unnecessary dissection of corpses as a form of mutilation, thus forbidding it, there were no corpses for study available through official channels. Dakhmas were repeatedly broken into, much to the dismay and humiliation of the Zoroastrian community. Secondly, while the towers had originally been built away from population centers, the growth of the towns led to the towers now being within city limits. Finally, many of the Zoroastrians themselves found the system outdated. Following extended negotiations between the anjuman societies of Yazd, Kerman, and Tehran, the latter gained a majority and substituted the dakhma with a cemetery some 10 km from Tehran at Ghassr-e Firouzeh (Firouzeh's Palace). The graves were lined with rocks and plastered with cement to prevent direct contact with the earth. In Yazd  and Kerman, in addition to cemeteries, orthodox Zoroastrians continued to maintain a dakhma until the 1970s when the dakhmas were shut down by law.

In India
Following the rapid expansion of the Indian cities, the squat buildings are today in or near population centers, but separated from the metropolitan bustle by gardens or forests. In Parsi Zoroastrian tradition, exposure of the dead is additionally considered to be an individual's final act of charity, providing the birds with what would otherwise be destroyed.
In the several decades of the late twentieth and early twenty-first century the population of birds of prey on the Indian subcontinent declined, by 99.9% as of 2008, primarily due to diclofenac poisoning of the birds following the introduction of that drug for livestock in the 1990s, until banned for cattle by the Indian government in 2006. The few surviving birds are often unable to fully consume the bodies. Parsi communities in India are currently evaluating captive breeding of vultures and the use of "solar concentrators" (which are essentially large mirrors) to accelerate decomposition. Some have been forced to resort to burial, as the solar collectors work only in clear weather. Vultures formerly disposed of a body in minutes, and no other method has proved fully effective.
The right to use the Towers of Silence is a much debated issue among the Parsi community (see Parsi for details). The facilities are usually managed by the anjumans, the predominantly conservative local Zoroastrian associations (usually having five priests on a nine-member board). In accordance with Indian statutes, these associations have domestic authority over trust properties and have the right to grant or restrict entry and use, with the result that the anjumans frequently prohibit the use by the offspring of a "mixed marriage", that is, where one parent is a Parsi and the other is not.