E-Mail
I want to receive news on my email
Poll
What do you think of Iran on trip website?
Alexander's Prison of Yazd 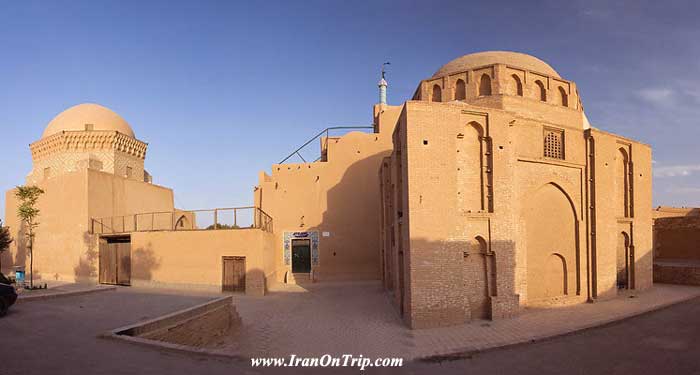 Eskandar Prison is an ancient domed structure apparently known by this name as a result of a reference in a Hafez poem. The complex contains a deep, circular, brick-lined pit almost 10 meters in diameter resembling an ancient dungeon found at the heart of the old. There is also a well and some nooks in the courtyard. It is alleged by some to have been built by Alexander to hold his captives during his conquest of Persia and alleged by others to have been built by the Persians to hold Alexander himself. Whatever the true story, the complete complex itself is almost certainly a later construction.
The dome of Eskandar Prison is made of raw clay and is decorated with plaster works and golden and azure watercolor. The noteworthy architectural features of the dome are traceable in other domes dating to the Mongolian period in Iran. Each side of the domed tower is almost 9 meters long and it rises almost 18 meters tall. There is little left of the inscriptions inside the dome but from what remains it appears to be kufic writings. The material used in much of the building is clay, however, it has been restored with bricks in the past few decades. Some steep stairs lead the way down into the dungeon although nowadays it is a beautiful room decorated with tables and red carpets and serves is a tea house.

Eskandar Prison is currently advertised as been built as a mosque and Ziaiyeh religious school and to have no connection to Alexander (although the reference is believed to have come from Hafez’s poetry. The original purpose of the building is unknown but it now serves as an Ethnographic Museum. Inside there is a detailed scaled model of the old city and a collection of labeled archaeological artifacts that were dug up around the city. What really brings the museum to life however is the staff of traditionally trained artisans who are on hand to show off their skills by working the old wood framed looms and throwing clay pots to demonstrate the crafts that made the city famous throughout Persia and along the old Silk Road to China.
It should me mentioned though that the museum has more gift shops than actual exhibits, selling the works of the artisans who are trained in the small school on site, which has lead this place to be dismissed by some visitors as a tacky tourist trap. In recent years, the complex has attracted an increasing number of tourists for Norooz.
In 2006 for the first time Cultural Heritage authorities undertook an elaborate program to treat Eskandar Prison with pesticides to negate the threat of termites. Eskandar Prison is a registered Iranian National Heritage.