E-Mail
I want to receive news on my email
Poll
What do you think of Iran on trip website?
Turkman Tribes: Cultural & Athletic traditions & Rites 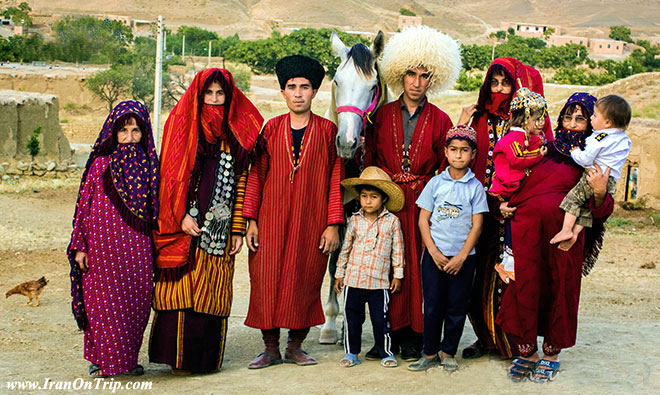 Geographical situation of "Turkman Sahra" region
Gorgan plain is situated on the coast of the Caspian Sea lower than the sea level, but the more we go toward the east the more will be the elevation of the ground. In the north of Gorgan plain, there is a vast low region which stretches as far as the forest region of Turkmenistan and in its south there is the continuation of eastern parts of Alborz chain of mountains, which is much higher than the plain and contain peaks more than 3000 meters high.The mountainous region situated in the east of Gorgan plain includes villages and districts of Kalaleh, Goli Dagh, Ghara Bolkhan, Torveh Tappeh and Hesarche, and the plain part of the region, where Iranian Turkmans live, is located in the south of Atrak river and is called Turkman Sahra.

Tribal roots and history of Turkmans
Turkmans are some groups of middle yellow who, under various social and natural conditions and factors, invaded Central Asia and gradually settled there.According to common narrations, the head of Turkmans was someone called Aghooz Khan, and in the myths and stories of Turkmans he is regarded to be the same as Adam. Another point worthy of mention in these myths is the reference made to Noah and his three sons. In the Turkmans' family tree we come across such names as Tatar, Turk, etc who were descendants of Alinje Khan.In any case the Turkman tribal groups were not solid and uniform in the 6th Hijira century. In the 8th and 9th centuries they were mixed, resulting in gradual elimination of tribal features existing among them. After demarcation of frontiers between Iran and Russia, migration and transfer of Turkmans diminished to a certain extent, and only some groups such as Yamoots, Tekkehs, Saloors and Sarighs kept on emigrating. After the 1917 revolution in Russia, these migrations came to an end.

Role of marriage in Turkman society
The role of marriage in the tribal system is due to the need for manpower. Women play an important role in the tribal system of tribes, because they, just like men, are productive, as they make felt, spin wool, weave carpets and cloths, milk cows and sheep, prepare dairy products for the family, build cottages and help with men in cultivation, maintenance and harvesting of agricultural products and, most important of all, they give birth to children and help their husbands in other activities too.Hence raising a family which is the result of a new marriage gives it an added power and respect, that is why elaborate and glorious ceremonies and rites are observed in the case of courting and marriage. Sport contests play an important role in them. Horse racing and wrestling are performed by men and the juvenile dances and plays are carried out by adolescents and songs are sung by some groups too. Every man and woman enjoys himself or herself. As wedding ceremony is highly important among Turkmans so it would be appropriate to describe its stages accurately.

The ceremony is usually held in open space and desert, and two tars are played. The wedding celebrations are organized in two days and separately for men and women. As guests come from far places, so celebrations continue for two or three days, so that everybody gets an opportunity to take part. The guests usually come from the surrounding villages on horsebacks in order to take part in horse racing. Before the guests arrive in `ubbeh' or village they are welcomed by the same number of horsemen who shake colorful pieces of cloth in front of the guests. The guests chase the horsemen to get hold of the pieces of cloth and after moving to and fro get them and then join the celebrations.

Horse racing and other contests
When guests are entertained, town criers or heralds cry to people to prepare themselves for horse race. Here two kinds of races are organized, one is linear race in which a direct course of three or four kilometers, is chosen; the other is quadrangular course or `ilam'. First the judges choose four horses and announce that anybody can take part in the race. Then the horsemen take part in the contest two by two and each races one to 8 rounds. Ilam is made in rectangular form and a pole is hoisted in each corner. If a horse moves between the poles he will be declared the loser. Another kind of race is held in 8 rounds. Linear race is held too and in the end the prizes are awarded by the friend of the bridegroom's father. After horse racing, wrestling contests are organized, four by four and prizes will be given to four wrestlers.
NOTE: Linear horse racing is called Dogheri Chapi; ilam horse racing is called sudanaghi or ay-yelagh and the herald is called ghatanech.

Turkman traditional wrestling
The main sport in Turkmans' life is horse racing. Horse is the most important part throughout his life. Agile Turkman horse riders start their career from the age of 5, ie from the time they can sit on a horse back.In addition to horse racing, wrestling is an important traditional sport of Turkmans. They start this sport at a very young age, and win awards for their villages and towns until they are capable of doing so.Turkman wrestling contest is an arena for showing power and strength by champions against known or unknown rivals who are sometimes much stronger. In this wrestling weights of participants or time of contests are not taken into account. The two contestants continue their fights indefinitely until the final results are announced. The space of this contest is not limited and the wrestler is allowed to take his rival to a long radius. Shawl has a special role in Turkman traditional wrestling.

Here the wrestlers tie shawls round their waists. According to regulations when the referee ties red shawl round wrestlers and puts the hands of each wrestler in the shawl of the other, the two wrestlers will start fighting. In addition to two referees two assistant referees supervise over correct tying of shawls. Then the referee hits the palms of his hands on the backs of the wrestlers and the contest starts.The most important point in this wrestling is that if the hand or knee or any part of the wrestler's body, except his palm, touches the ground, then the wrestler will be declared the loser, and the referee will raise the other's hand and will declare him the winner. A prize is usually awarded to the winner. In traditional Turkman wrestling, strong wrists and legs contribute to victory. It rarely happens that wrestling ends in a draw. If the shoulders or sides of the two champions touch the ground at the same time the match will end in `chal' or draw and the hands of the two will be raised as the winners. Any prize envisaged for this purpose will be divided equally between them. Referees are chosen by majority votes of the wrestlers. Six or seven are chosen from among the expert traditional Turkman wrestlers who choose one among them as the referee.

An elder man from among the referees is chosen as the trustee or treasurer, to collect prizes from people to encourage the champions. In the past a cow was awarded to the great champion, called Owla; a sheep to the second rate champion called chayerchi; and blankets and other articles to other champions. According to the prevalent custom, when the referees of the Turkman traditional wrestling receive gifts they would wave their handkerchiefs, which indicate gratitude of champion and the organizer of the contest.

The sum gifted is usually 50 to 100 thousand rials, against which a handkerchief is presented to the donor regardless of the amount. The recipient of the handkerchief rubs it round his forehead and takes it with him.The traditional wrestling is held in religious festivities, weddings, circumcisions and other happy occasions. As a sign of vow or dedication, the recipient ties the handkerchief and touches it on his forehead.In Turkman Sahra all weddings and other celebrations end in horse racing and wrestling. These events are, in fact, the main parts of celebrations.