E-Mail
I want to receive news on my email
Poll
What do you think of Iran on trip website?
Indigenous theatre Ta'ziyeh (mourning Rituals) The nucleus of the Ta'ziyeh is the heroic martyrdom of Hussein, the grandson of the prophet Muhammad. After the death of the Prophet (11 A.H./A.D. 632) the still young Muslim community was faced with the problem of providing new leadership.
Almost immediately the community found itself divided into two two bitterly opposed factions, those who espoused the ancient Arabic tradition of succession by election and those who desired succession by inheritance, through blood-relationship to the Prophet. The former are known as Sunnites; the latter as Shi'ites. 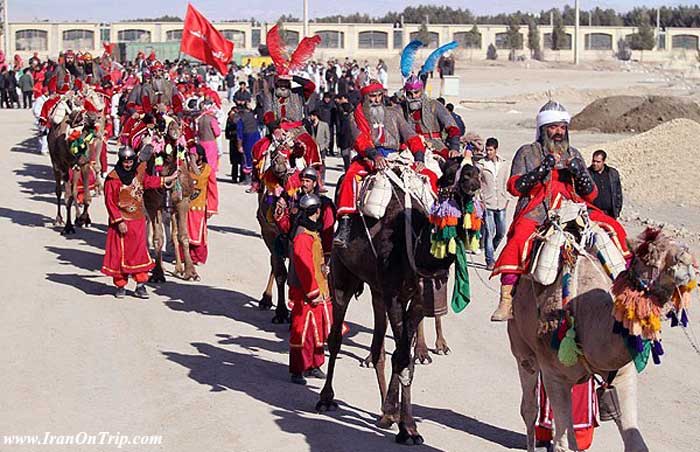 Three successive caliphs were elected; they had been companions to the Prophet. Then Ali, the cousin and son-in-law of Muhammad and the leader of the Shi'ite partisans was recognized as the legitimate caliph. To Shi'ites, Ali, "the Hand of God", is so exalted that it said: "Muhammad is a city of learning, Ali is its gate."
But Ali was assassinated and later his elder son, Hassan, was poisoned and the Sunnite governor of Syria took over the caliphate and moved in its capital to Damascus. Ali's younger son, Hussein, however, persisted in championing the cause of the House of Ali and was asked by a Shi'ite group in Kufa, a city near today's Baghdad, to join them as their head.
Hussein accepted and set out from Mecca with his family and an entourage of about seventy followers. But on the plan of Kerbela they were caught in an ambush set by the Sunnite caliph, Yazid. Though defeat was certain, Hussein refused to pay homage to him. Surrounded by a great enemy force, Hussein and his company existed without water for ten days in the burning desert of Kerbela. Finally Hussein, the adults and some male children of his family and his companions were cut to bits by the arrows and swords of Yazid's army; his women and remaining children were taken as captives to Yazid in Damascus.
The renowned historian Abu Reyhan al-Biruni states, "... then fire was set to the camp and the bodies were trampled by the hoofs of the horses; nobody in the history of the human kind has seen such atrocities."
The siege began on the first day of the Muslim month of Muharram and came to its bloody end on the tenth day, called Ashura. It was in the 61st year of the Muslim calendar which corresponds to A.D. 680. Soon after, the battlefield and tombs at Kerbela became a place of sacred pilgrimage for Shi'ites throughout the Islamic Empire.
The word ta'ziyeh literally means expressions of sympathy, mourning and consolation. As a dramatic form it has its origins in the Muharram procession commemorating Hussein's martyrdom and throughout its evolution the representation of the siege and carnage at Kerbela has remained its centerpoint.
Ta'ziyeh has never lost its religious implications. Because early Shi'ites viewed Hussein's death as a sacred redemptive act, the performance of the Muharram ceremonies was believed to be an aid to salvation; later they also believed that participation, both by actors and spectators, in the Ta'ziyeh dramas would gain them Hussein's intercession on the day of the Last Judgment.
Perhaps because of their tradition of hereditary kingship and strong nationalism, the people of the Iranian plateau were particularly hospitable to the Shi'ite form of Islam. According to Persian legend, the daughter of the last Persian king of the Sasanid dynasty was taken captive during the Muslim invasion and married to Hussein.
from the beginning, the annual Muharram mourning ceremonies were observed with great pageantry and emotion. Veneration of deceased heroes had long been an important part of Persian culture; the theme of redemption through sacrifice found parallels in such pre-Islamic legends as the death of Siyavash and in the ancient Mesopotamian ritual of Adonis-Tamuz. By the tenth century A.D. impressive Muharram processions were well-established. The reliable historian Ibn al-Athir, tells of great numbers of participants, with black painted faces abd disheveled hair circling round and round the city of Baghdad, beating their chests and moaning the mourning songs at the festival of Muharram. It was at this time when the Persian Buyid dynasty ruled from Baghdad.
In the first years of the sixteenth century, when under the Safavid dynasty, Persia, which had always been a strong cultural power, again became a political power, Shi'ite Islam was established as the state religion and was used to unify the country, especially against the aggressive Ottomans and Uzbeks who were adherents of Sunnite Islam.
The Muharram observances received royal encouragement; commemoration of Hussein's martyrdom became a patriotic as well as religious act. Many accounts of the processions, written mostly by European envoys, missionaries, merchants and travelers, tell of characters dressed in colorful costumes marching, or mounted on horses and camels, depicting the events leading up to the final tragedy of Kerbela. 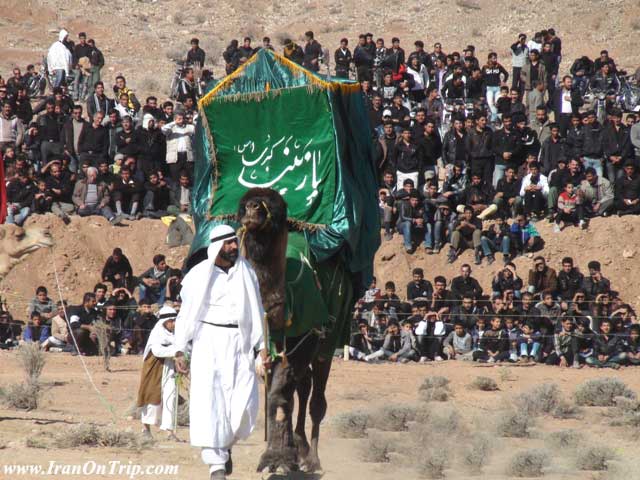 Living tableaux of butchered martyrs stained with blood, their bodies showing simulated amputations, were moved along on wheeled platforms. Mock battles were mimed by hundreds of uniformed mourners armed with bows, swords, and other weapons. The entire pageant was accompanied by funeral music and spectators, lined up along its path, beat their breasts and shouted "Hussein, O Hussein, the King of the Martyrs" as it passed by.
Certain similarities between the Muharram processions and the European medieval theatre of the Stations of the Cross was obvious. An important difference is, however, that during the Muharram ceremonies the spectators remained stationary while the tableaux moved and in the theatre of the Stations the tableaux were stationary while the viewer-penitents moved.

The Muharram processions are, perhaps, more similar to the Passion Week celebrations which can still be seen in such Christian countries as Guatemala.At the same time as the Muharram ceremonies were flourishing and developing under the Safavid rule, a second important and popular form of religious expression came into being. This was the dramatic narration of the life, deeds, suffering and death of Shi'ite martyrs.
Virtually always connected, though sometimes only slightly, with the Kerbela ambush, these stories were taken from a book called Rowzatu'l Shuhada or The Garden of Martyrs, written in Persian and widely circulated among Shi'ites from the early sixteenth century onward. Unlike the Muharram processions, the rowzeh-khani -- garden recitations -- were stationary, the narrator usually seated on a raised pulpit, his audience gathered in a semicircle beneath his feet.

Soon, reading from The Garden of Martyrs began to serve only as a framework and springboard for professional narrators who provided creativity on the suffering and deeds of the many Shi'ite heroes. Through choice of episodes and modulation of his voice, the narrator was able to excite and manipulate the emotions of his audience, to produce in them a unity of feeling of great intensity.
For about two hundred and fifty years the Muharram processions and the narrative recitations existed side by side, each becoming more complex and at the same time more refined and theatrical. Then in the middle of the eighteenth century they fused. A new dramatic form was born, Ta'ziyeh-Khani or, as it is more familiarly called, simply Ta'ziyeh.

Interestingly, from the beginning, the antagonists recited their parts, while the protagonists sang theirs. The main theme was still the siege of Kerbela, but the focus was on individual heroes around whom separate plays were written. Martyrs who predated and postdated Kerbela were added to the repertoire.
Ta'ziyeh serves as an excellent illustration of the concept that the roots of drama are in funeral songs and commemoration of deceased heroes, and also, that in the development of the theatrical art, the text is one of the last elements to be added.
It is significant to remember that, in the entire Muslim world, Persia was the only country to nourish drama. this can perhaps be attributed to Persia's continuous attachment -- in spite of religious prohibitions -- to figural representation. Persia is justly famous for painting, sculpture, and the other visual arts.

Nevertheless it must be noted that, although the Persian literary heritage extends back over 2,500 years and is renowned for its carefully structured national and romantic epics, its only true drama is the Muslim inspired Ta'ziyeh, which took well over a millennium to develop.
That this should be so, especially in view of Persia's close cultural and geographical ties with Greece and India, both of which had extraordinarily rich theatrical traditions, remains a puzzle. Indeed, no Greek amphitheaters have been discovered on the eastern banks of the Euphrates...
In the beginning, Ta'ziyeh consisted of a few loosely connected episodes with long monologues followed by some dialogue. Hardly any action was connected directly with these quite primitive recited and sung parts. In fact, the actors read their lines from scripts about two inches wide and about eight inches long which they held in their pals.

The tradition continued and is practiced even today. It is perhaps at least in part an expression of the Muslim proscription against representation of living things; the script serves as a barrier to any suggestion that the actor actually becomes the person he portrays. In this respect it bears some similarity to the use of masks in the Greek theatre.
The spectacle of the pageant rather than the text was most important. Nevertheless, within a century, this art form produced a corpus of several hundred lengthy dramas.