E-Mail
I want to receive news on my email
Poll
What do you think of Iran on trip website?
Kerman Darvish Khan's Stone Garden 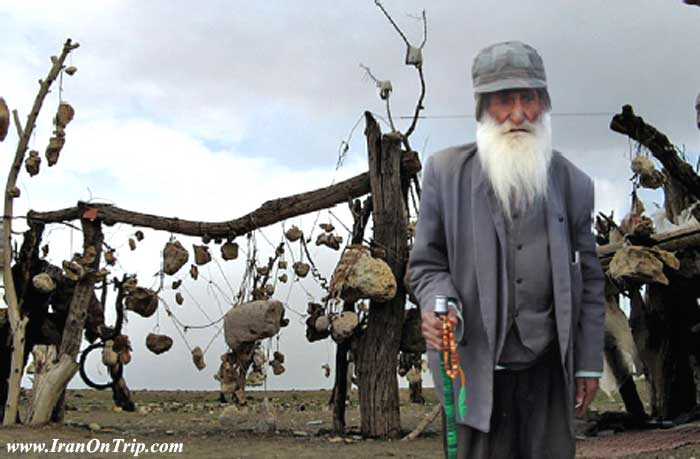 Stone Garden is Iran’s most amazing garden visited by about 6,000 Iranian and foreign tourists every year. Darvish Khan's Stone Garden is located about 45 kilometers from Sirjan in Iran's Kerman  province and 40 kilometers from Shiraz. The garden was created almost 4 decades ago by the late Darvish Khan Esfandiarpoor upon losing his treasured garden. Darvish Khan lived in the garden, with his only son and 7 grandchildren until his death in 2007. While he was a deaf and mute gardener, his abstract artworks which were a sign of his great imagination. During his lifetime due to his disabilities communication was never easy, however, Darvish Khan was always eager to show his work and explain about them to visitors.
The trunks and branches of dry trees were the basis of Darvish Khan’s stone garden and on these trees he used to connect different shapes of stones or any other objects, even dead animals he would find where he was living. He had a description for each of those decorated trees and by nodding, especially to the sky and then to his artworks, he would try to share his thoughts and imaginations. 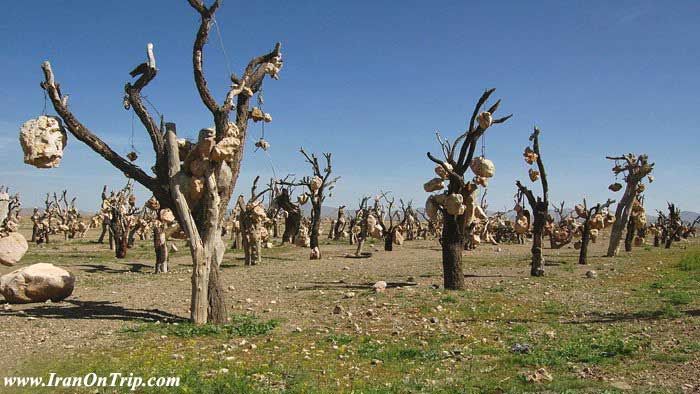 Considering the weight of some of the stones, much effort had been put in creating this garden. One of the residents of the village recalls that three months after Darvish Khan’s death, one of the trees collapsed. It took 3 or 4 men to erect it again, even though originally Darvish Khan had acted alone in doing so.It’s not clear what possessed Darvish Khan to create this garden. One theory, strengthened by the claims of his daughter in law, Mehr Azam, is that he lost much of his land in 1961 and as a sign of protest, and as a result of his inability to speak, proceeded to hang stones from the many already dead trees and their branches to voice his objection. Darvish Khan was featured in the 1976 movie “The Stone Garden”, produced by Parviz Kimiavi. In the movie, Darvish Khan who is a shepherd, one day falls asleep in the desert and begins to dream. When he awakens he finds a strange stone placed under his head. He takes the stone back home with him and hangs it from a tree. This incident repeats itself in the following days and before long Darvish Khan creates a stone garden around his tent. Pretty soon news of his garden spreads and people from neighboring villages come to see it. Darvish Khan’s wife decides to charge people in exchange for viewing the garden and as result reeks much havoc upon Darvish Khan’s life. Kimiavi revisited Darvish Khan in 2004 and filmed another movie titled “The Old Man and His Stone Garden”. Kimiavi’s original version of the movie was featured in the Berlin International Film Festival. 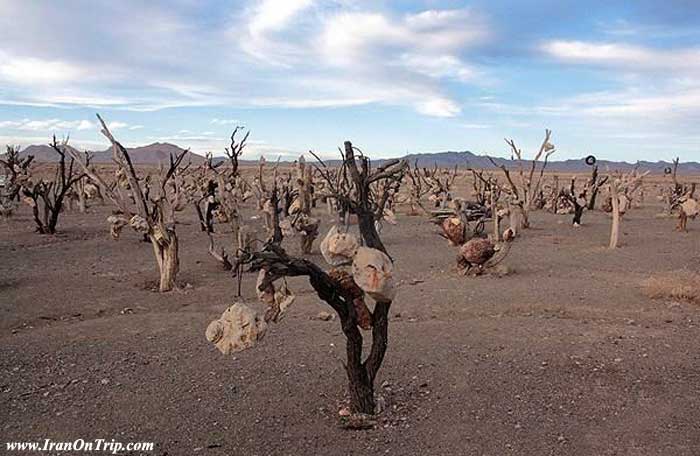 Darvish Khan’s daughter in law had expressed hope that the occasional visitor would take with them memories of this garden as a souvenir and spread the word about it. She recalled the years where people with their video camera were filming the area (in all likelihood Kimiavi's crew) but concluded that the films created were probably never watched by any government official as no one has stepped forward to assist her in maintaining the garden. Darvish Khan passed away on April 8th, 2007 at age 90 and was buried in his stone garden. While there were a few representatives of the Cultural Heritage and Tourism Organization present at his funeral, however, his death, much like his life, was for the most part in seclusion. It was promised that his garden would be fenced in and protected by the ICHTO, however, as of a year after Darvish Khan’s death nothing in this regard had been done.