E-Mail
I want to receive news on my email
Poll
What do you think of Iran on trip website?
Shiraz Khatam or Marquetry 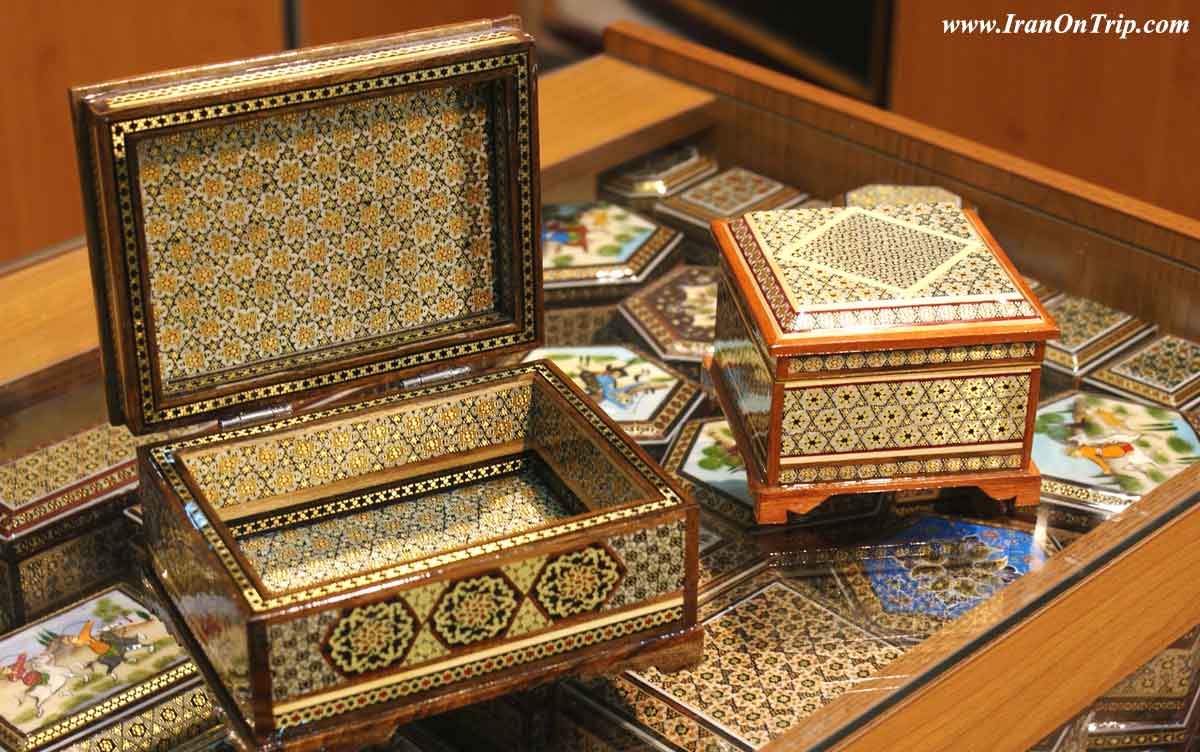 Khatam or Marquetry is the art of decorating the surface of wood with delicate pieces of metal, bone and wood precisely cut in geometrical figures and shapes.
Marquetry is one of the finest handicraft artworks of Iran. The materials used in the construction of inlaid articles can be in gold, silver, brass, aluminum and twisted wire. Various types of inlaid articles and their quality are known by the size and the geometrical designs. The smaller the pieces, the higher the quality. 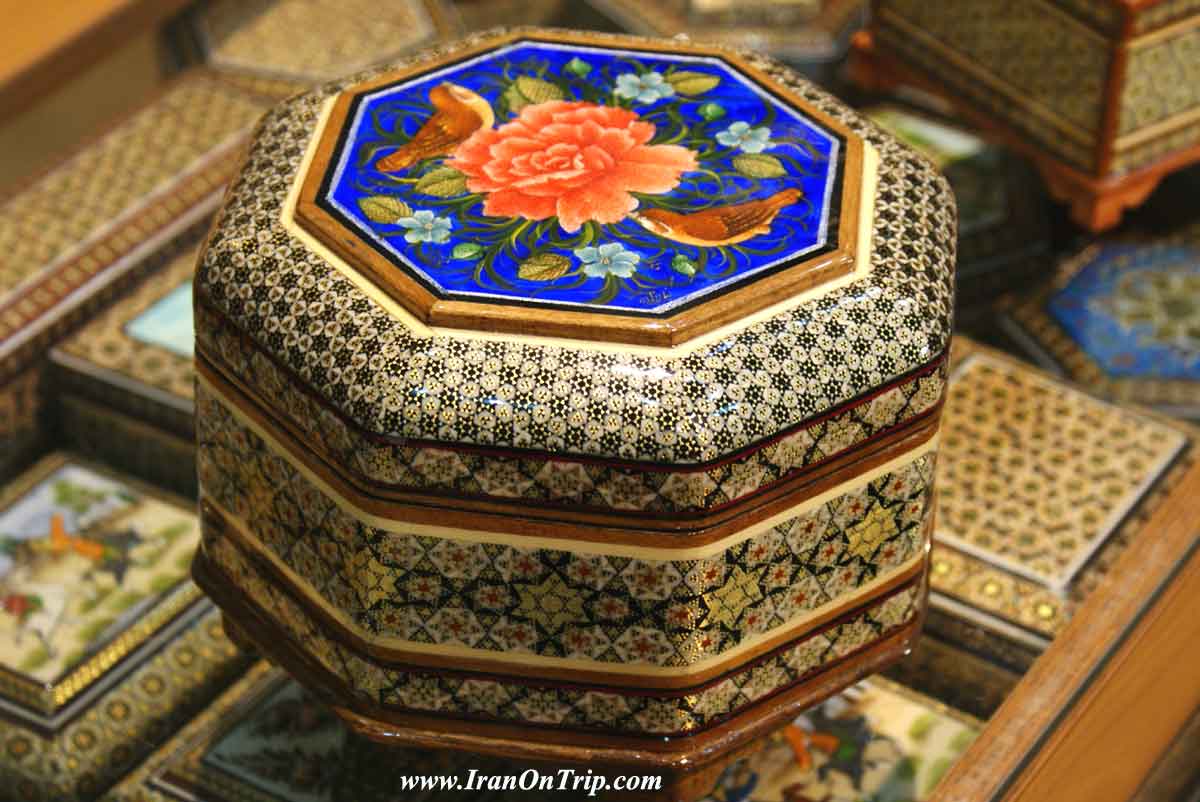 One of the most wanted Khatam artworks is book cases which used to hold Quran or other valueable books in it. We offer the Khatam Boxes with Quran (or your desired book) in a genuine leather cover, which is painted with Miniature.
Inlay work Khatamsazi is one of the valuable arts which exists in East. There is not enough information about the past history of inlay work since the pre-requisite substance is mostly wood & stick which would decline with the passage of time.
The oldest inlaywork belanges to the safarid era to Shah Ne'mato-llah-e Vali in Mahan-e Kerman.
It is suggested that Inlay work for the first time appeared in Shiraz & the best model of this art is the inlay table which got the golden medal in the Bruxesl world exhibition in the year 1958. 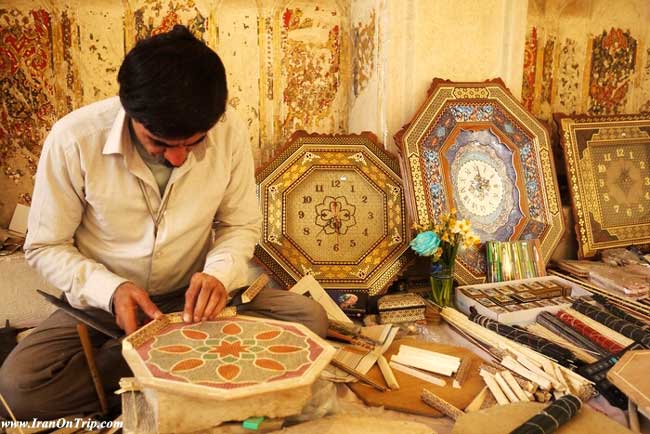 The ornamentation of the doors of holy places predominantly consists of inlaid motifs. Samples of these can be observed in the cities of Mahshad, Qom, Shiraz and Rey. In the Safavid era, the art of marquetry flourished in the southern cities of Iran, especially in Isfahan, Shiraz and Kerman. An inlaid desk, which is one of the definitive masterpieces of this art, was awarded the first prize and a gold medal in an art exposition in Brussels recently[citation needed]. This desk is now preserved in the National Museum in Washington[citation needed]. Also in some of the Majestic places and homes, doors and various items have been inlaid. The inlaid-ornamented rooms in Saadabad Palace and the Marble palace in Tehran are among masterpieces of this art.
Currently this art is being practiced in Isfahan, Shiraz and Tehran. Inlay masters, preserving the nobility of their art, have brought forth great innovations in this fine art. Woodcarving is one of the other outstanding Iranian arts. Designing has a special role in this skill. In wood-carving, magnificent patterns inlaid in wood, ivory or bone, with simple or protruded shapes are created. 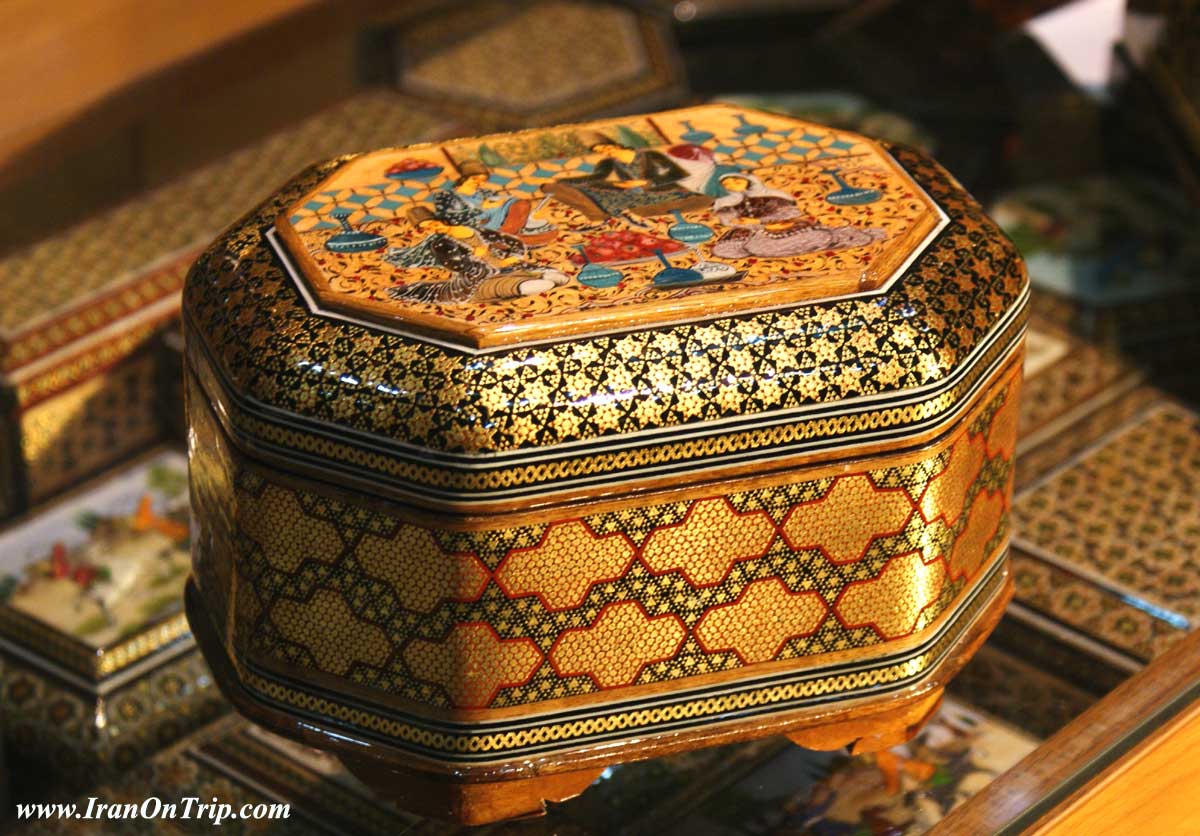 One of the top masters in this art is Mohammad Bagher Hakim-Elahi. He learned the art of Khatam in his youth in Shiraz, Iran, from Master Sanee-Khatam, and thought it to his youngest brother, Asad-ol-lah Hakim-Elahi . In early 1950s, Mr. Hakim-Elahi migrated to Tehran, where he lived until the end of his life in March 2012. During his life he created numerous Khatan art work, ranging from small frames, and jewelry boxes, to large items such as coffee tables, and large chandeliers, some of which are currently in Museums in Iran, but most are in private collection all around the world.