E-Mail
I want to receive news on my email
Poll
What do you think of Iran on trip website?
Hasht Behesht Palace, Esfahan-Iran 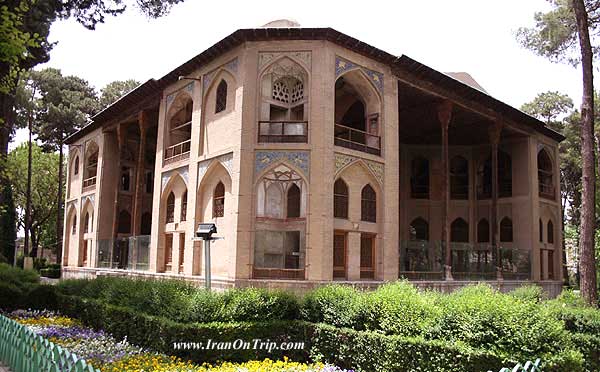 Located in Esfahan (a city of Esfahan province)
In a dry city which is located at the edge of desert, with long hot summer, Gardens and streams of waters, beautiful roses, shades of trees, sound of birds and nightingales play a great role in our lives. In great part of Iranian literature, especially poems, gardens are beautiful parts of our lives. In holy Quran, several verses of this holy book talks about paradise, full of green trees, pure and fresh streams of water, and other blessing of Almighty Allah is promised. Gardens are a small symbol of the promised paradise. Thanks to Zayandeh rud River which has created a green ring in the neighborhood of desert.
The Hasht Behesht palace was built in the centre of Baghe Bolbol (The Nightingale Garden) dates back to 1660. The palace is the most important building which was built during Shah Suleiman Safavid time. The palace experienced new styles of stucco work and stained glass and mirror works.
Hasht Behesht was renovated by Fathali Shah Qajar in the 19th century. It was used as residential palace by Zele Sultan (Fathali Shah’s son). This useless man even did not maintain ornamentations of the palace.
Chahar Taghi is a type of Sassanid and pre – Islamic architecture, but the style was beautifully developed and enlarged at the time of Safavid dynasty. The structure has octagonal shape and this kind of shape can be seen in various part of it. It is two storey palaces which have been seriously damaged.
During hot summer days, circulation of air and wind, cooled by surrounding water streams and beautiful plane, and sycamore trees created nice comfortable environment for residents.
The original palace was decorated with beautiful gilded mosaics, mirror work, plaster work, and various kinds of floral paintings on plaster. Especially ceiling of the palace was ornamented with variety of plastered pendent decorations. Unfortunately Zele Sultan, the crazy resident neglected valuable Safavid ornamentation and covered major parts of original decorations with plaster and redecorated with inartistic designs.
For new layers of plasters they had to hammer old layer and then covered the ruined original layer (notched paintings) in order to cover new layer of decoration. The new plaster layer stuck to the walls.
The palace was repaired recently. New layers of Zele Sultan time were removed. The original layer which was notched and ruined was repaired.
Hasht Behesht is a unique garden pavilion. Today the palace’s garden is converted into a public park; therefore it has lost its original features and shapes. 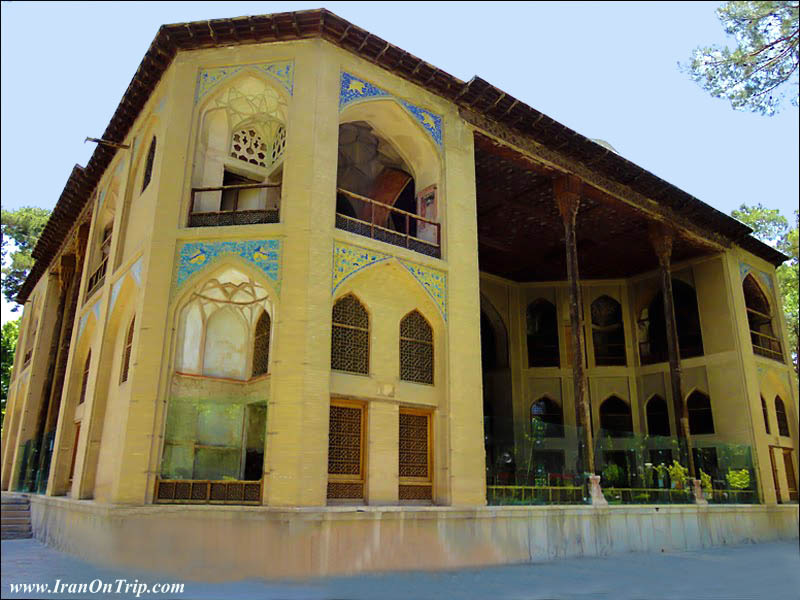 One of the most famous Safavid palaces in Isfahan is the Hast Behest, a relatively well-preserved building dated to 1080/1669 .As had been the pattern in the Safavid constructions of palaces in Isfahan, Shah Solaymān (r. 1666-94) also embarked on the construction of a new palace soon after he ascended the throne. His palace, however, was constructed not in the birun or public zone of the Dawlat-Kana, but in the vast gardens of Bolbol “Nightingale,” located to the south of the harem. As such, the Hast Behest manifested, both in its location and its architectural and decorative strategies, the priorities of a more private function than the feasting rituals and ceremonial events held at the Talar-e Ṭawila or the Cehel Sotun.
As its name indicates, this was a building based on a hašt behest plan. Raised on a platform, the structure reads as a square with its corners cut away to resemble a modified octagon. The corners are accentuated by the massive, two-story rise of pylons that are perforated with stacked pointed-arch niches. Each of the four sides of the building, on the other hand, is given to spacious porches roofed over with the placement of a few tall and thin wooden columns. The large and tall central space is a fully articulated octagon, rising well above the two-story height through an elegantly tapering and mirrored
internal lantern.The sensuality of the volumetric alternating of solids and voids within the structure of the Hast Behest itself is contrasted with the rich surface articulation through murals, perforated woodwork, prismatic mirrors and extensive tile work of figural subject matter.Descriptions of events at this building, of leisurely outings of the harem women and of the private gatherings, clearly synchronize with the architectural and decorative particularities of the Hast Behest .